This is a story of finding your way in a broken world. I would give it more stars, if I could.

Seven year old Adria Starr is orphaned in the great cholera epidemic of 1833. She is nursed in the nearly abandoned town by two black servants, Louis and Tilda. Then a young widow, Ann Hanson, takes over her care. Louis has been entrusted with the keys to the hotel when his master flees the disease. Unaffected by cholera, Louis also tends to and buries many dead.

Ann Gabhart takes a real story of an incident during the cholera outbreak of 1833 and works her magic to tell a heartfelt tale of faith at work in lives of faithful people in Springfield, Kentucky. Get a tissue box ready for this one.
Ann aptly captures the thoughts and actions of seven year old Adria and gives older Adria the spark of enthusiasm for the abolitionist movement. 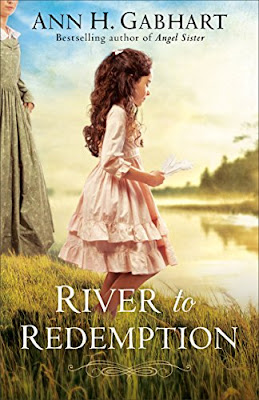 Her narrative flows smoothly and immerses the reader in the story. She builds characters with real, tragic problems and gives them a reliance on God that sustains them through the tough seasons of life. The phrase “pray, believing “ resonates throughout the book. River to Redemption has a theme of realizing true freedom and peace with God, through Christ, no matter what your outward circumstances dictate.
The book is not without romance. Ann and the new preacher, Will, are navigating life after each loses a spouse. But they begin to release their grief and there is a promise of new love. Meanwhile, Adria is torn between two suitors.

Ann is one of my favorite authors and I knew I would love this book. She did not disappoint. Her prose is just lyrical. I recommend this for lovers of historical fiction. It is a quality read.

Backcover Blurb:
Orphaned in the cholera epidemic of 1833, Adria Starr was cared for by a slave named Louis, a man who stayed in Springfield, Kentucky, when anyone with means had fled. A man who passed up the opportunity to escape his bondage and instead tended to the sick and buried the dead. A man who, twelve years later, is being sold by his owners despite his heroic actions. Now nineteen, Adria has never forgotten what Louis did for her. She's determined to find a way to buy Louis's freedom. But in 1840s Kentucky, she'll face an uphill battle.

Based partly on a true story, Ann H. Gabhart's latest historical novel is a tour de force. The vividly rendered town of Springfield and its citizens immerse readers in a story of courage, betrayal, and honor that will stick with them long after they turn the last page.