THE RECKONING AT GOSSAMER POND by Jaime Jo Wright, reviewed by Winnie Thomas

Jaime Jo Wright fills her books with enough suspense, mystery, and intrigue to keep the reader turning pages far into the night. She throws in enough romance to provoke some sighs and also adds inspiration in the form of forgiveness, redemption, and mercy. 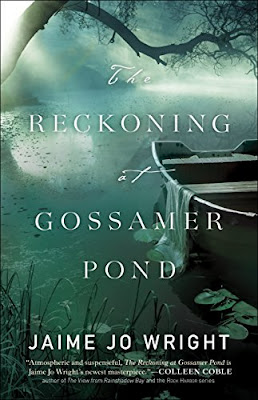 I was constantly surprised by all the twists and turns this story took. What an intriguing, convoluted storyline—actually, two storylines told in a time-slip about a century apart. Wright has masterfully created multi-layered characters and placed them within the tale where she peels back their layers gradually, exposing the inner person to view. With included references to Edgar Allan Poe’s works, this story drips with atmosphere and enough creepiness to keep you on the edge of your seat.


Wright is a talented writer. I admire her ability to take two different, but related, stories and tie them together and make them not only work, but intertwine cohesively. I’m looking forward to reading more of her books.

For over a century, the town of Gossamer Grove has thrived on its charm and midwestern values, but Annalise Forsythe knows painful secrets, including her own, hover just beneath the pleasant facade. When a man is found dead in his run-down trailer home, Annalise inherits the trailer, along with the pictures, vintage obituaries, and old revival posters covering its walls. As she sorts through the collection, she's wholly unprepared for the ramifications of the dark and deadly secrets she'll uncover.

A century earlier, Gossamer Grove has been stirred into chaos by the arrival of controversial and charismatic twin revivalists. The chaos takes a murderous turn when Libby Sheffield, working at her father's newspaper, receives an obituary for a reputable church deacon hours before his death. As she works with the deacon's son to unravel the mystery behind the crime, it becomes undeniably clear that a reckoning has come to town--but it isn't until another obituary arrives that they realize the true depths of the danger they've waded into.

Two women, separated by a hundred years, must uncover the secrets within the borders of their own town before it's too late and they lose their future--or their very souls.