ENGRAVED ON THE HEART by Tara Johnson, review by Rebecca Maney

"You are a treasure, Kizzie Montgomery. Never let anyone tell you differently." 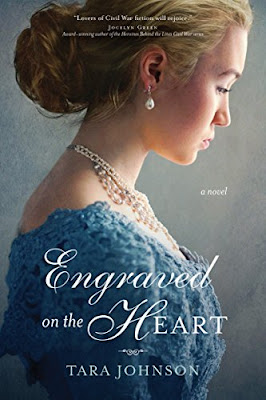 People have been giving Keziah Montgomery mixed messages all her life; "weak-minded", "addled" "not right in the head" . . . . . . her epileptic seizures causing her family great angst as she hovers on the cusp of spinsterhood.When such an incident brings her face to face with the one childhood friend who seemed to have exactly the right words at exactly the right time, Keziah can hardly believe that the "tall, trim, broad-shouldered" attending physician is Micah.

"He couldn't believe it. After all these years. . . . Kizzie Montgomery", still as beautiful as ever. Dr. Micah Greyson has returned to a Savannah that is on the verge of war. Even though his medical skills have earned him the right to avoid fighting for the South, his compassionate service to Union war prisoners has raised the eyebrows of many who assume that he is an abolitionist like his father . . . . . and they may be right. His clandestine activities have become highly dangerous, so imagine his surprise when he discovers that his beloved Kizzie has stumbled into being a "conductor".

Laced with Civil War history, and filled with intriguing suspense, "Engraved on the Heart" is essentially a tender love story between two childhood friends whose shortcomings only serve to make them stronger, and whose fears catapult them into the arms of a heavenly Father who has engraved their names on His heart. What an outstanding debut!

Reluctant debutante Keziah Montgomery lives beneath the weighty expectations of her staunch Confederate family, forced to keep her epilepsy secret for fear of a scandal. As the tensions of the Civil War arrive on their doorstep in Savannah, Keziah sees little cause for balls and courting. Despite her discomfort, she cannot imagine an escape from her familial confines—until her old schoolmate Micah shows her a life-changing truth that sets her feet on a new path . . . as a conductor in the Underground Railroad.

Dr. Micah Greyson never hesitates to answer the call of duty, no matter how dangerous, until the enchanting Keziah walks back into his life and turns his well-ordered plans upside down. Torn between the life he has always known in Savannah and the fight for abolition, Micah struggles to discern God’s plan amid such turbulent times.

Battling an angry fiancé, a war-tattered brother, bounty hunters, and their own personal demons, Keziah and Micah must decide if true love is worth the price . . . and if they are strong enough to survive the unyielding pain of war.

*I purchased this book and was under no obligation to review it, or provide a positive review.