STEAL AWAY HOME by Matt Carter and Aaron Ivey

"Have you stolen away to Jesus?" Wracked with anger and the desperation for freedom, Thomas Johnson is convinced that emancipation means physical escape from the drudgery and hopelessness of life as a slave on a Virginia plantation. Imagine his surprise when he overhears conversation about a London preacher who writes sermon after sermon denouncing slavery as unnecessary evil, his words "bold enough to spark a two story fire in the middle of the town square in Richmond, Virginia" where thousands of pages are burned to ashes. It's the first time that Thomas Johnson hears the name of Charles Haddon Spurgeon. Providence will prove that it won't be the last. 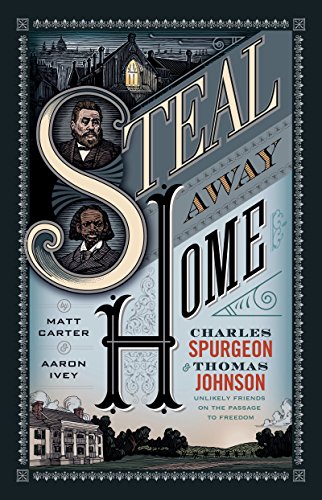 Charles Spurgeon bears heavy chains that are hardly physical, but mental and emotional. Called by God to preach at an early age, his almost overnight success is matched by deep, dark and relentless depression. Known around the world for his magnificent delivery and deep sincerity, " no one knew the private anguish with which Charles lived . . .  he seemed to juggle his numerous responsibilities with ease . . . and like the rise and fall of the tides, one moment of confidence seemed to follow another moment of anxiety - over and over again."

It seemed that Charles Spurgeon needs a dear friend. . . that unspoken prayer being answered in the form of Thomas Johnson, an unlikely hero, who makes his pilgrimage all the way across the Atlantic Ocean to study as a pastor. . . whose seasoned eyes seem to peer deep inside Charles' soul before delivering the words of encouragement that the great man of God needed to hear, " we serve an all-sufficient God, whose burden is light, and whose yoke is easy. He is the Light of the World. . .  Think about your suffering Charles . . . It's a burden, yes. But a gentle burden. And it's meant to stir up more faithfulness in you."

Johnson, an American slave, born into captivity and longing for freedom--- Spurgeon, an Englishman born into relative ease and comfort, but, longing too for a freedom of his own. Their respective journeys led to an unlikely meeting and an even more unlikely friendship, forged by fate and mutual love for the mission of Christ.

Steal Away Home is a new kind of book based on historical research, which tells a previously untold story set in the 1800s of the relationship between an African-American missionary and one of the greatest preachers to ever live.