"A life without Jack would be like a doused fire; ashy shades of gray washed of the light and heat that had created them."

Unbelievable. It was him! The Artful Dodger; introducing himself as Jack MacCarron; "she could not believe she'd almost fainted". It seems that they have both reinvented themselves, in spite of the fact that sordid pasts have a way of seeping through formalities and inescapable truths can prove to be formidable adversaries. 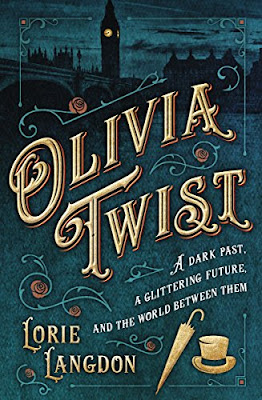 It's always about the children for Olivia Brownlow. Her gracious benefactor, a beloved uncle, has no idea that his exquisite niece is a lady by day and a thief by night, only to support the gang of orphans who depend on "Ollie's" generosity to funnel their sustenance. Why? She was one; and the handsome, tailored gentleman across the room taught her everything she knows.

Jack is quite enamored with the lovely Olivia Brownlow, soon realizing that she is just as subtle and skilled in subterfuge as he, maybe even more so after he becomes one of her besotted victims. Determined to get back what is "rightfully his", Jack begins to unwrap Olivia's myriad of secrets, finding that in spite of her spirited passion and loyal heart, she is poised to make the mistake of her life, very well losing it in the process. Must "true love mean sacrifice"?

Using razor sharp wit and lush, lyrical descriptive language, this author has demonstrated her ability to bring characters to life who would otherwise remain imaginary! #ReviewersNote: this story contains a diminutive amount of mild profanity befitting the characters.

Olivia Twist is an innovative reimagining of Charles Dickens' classic tale Oliver Twist, in which Olivia was forced to live as a boy for her own safety until she was rescued from the streets. Now eighteen, Olivia finds herself at a crossroads: revealed secrets threaten to destroy the "proper" life she has built for herself, while newfound feelings for an arrogant young man she shouldn't like could derail her carefully laid plans for the future.

Olivia Brownlow is no damsel in distress. Born in a workhouse and raised as a boy among thieving London street gangs, she is as tough and cunning as they come. When she is taken in by her uncle after a caper gone wrong, her life goes from fighting and stealing on the streets to lavish dinners and soirees as a debutante in high society. But she can’t seem to escape her past … or forget the teeming slums where children just like her still scrabble to survive.

Jack MacCarron rose from his place in London's East End to become the adopted "nephew" of a society matron. Little does society know that MacCarron is a false name for a boy once known among London gangs as the Artful Dodger, and that he and his “aunt” are robbing them blind every chance they get. When Jack encounters Olivia Brownlow in places he least expects, his curiosity is piqued. Why is a society girl helping a bunch of homeless orphan thieves? Even more intriguing, why does she remind him so much of someone he once knew? Jack finds himself wondering if going legit and risking it all might be worth it for love.

*I purchased this book with no obligations to review nor provide a positive review.