WE HOPE FOR BETTER THINGS by Erin Bartels, Reviewed by Rebecca Maney

"The past is never as past as we'd like to think."

Following an investigative assignment gone awry, Detroit Free Press reporter Elizabeth Balsom finds herself without a job and handed with a nearly impossible possibility; tracking down an elusive great aunt in order to assuage the guilt of a total stranger. What kind of story did this camera preserve? Why is James Rich so adamant that Nora Balsom would be interested in reclaiming it? And why won't he deliver it himself? 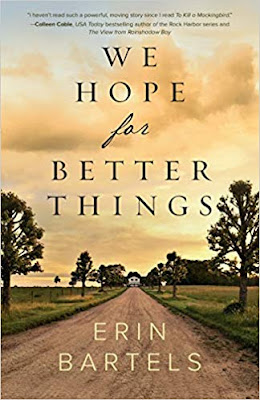 Out of that bizarre lunch encounter, not one but two stories emerge, that of her Aunt Nora (on the verge of losing her recollections to dementia) and that of the long ago inhabitants of the house Aunt Nora calls home. It seems that the more things change, the more they stay the same. . . .or is there hope for a better way?

When it comes to the issue of racial divides and unfair social mores, generations have felt the impact of discrimination. This book bravely sorts through a family history that repeats itself, and yet at the same time inspires a different outcome.

*Book provided courtesy of Baker Books through Interviews and Reviews. The opinions stated are entirely my own.

BackCover Blurb:
When Detroit Free Press reporter Elizabeth Balsam meets James Rich, his strange request--that she look up a relative she didn't know she had in order to deliver an old camera and a box of photos--seems like it isn't worth her time. But when she loses her job after a botched investigation, she suddenly finds herself with nothing but time.

At her great-aunt's 150-year-old farmhouse north of Detroit, Elizabeth uncovers a series of mysterious items, locked doors, and hidden graves. As she searches for answers to the riddles around her, the remarkable stories of two women who lived in this very house emerge as testaments to love, resilience, and courage in the face of war, racism, and misunderstanding. And as Elizabeth soon discovers, the past is never as past as we might like to think.

Debut novelist Erin Bartels takes readers on an emotional journey through time--from the volatile streets of 1960s Detroit to the Michigan's Underground Railroad during the Civil War--to uncover the past, confront the seeds of hatred, and discover where love goes to hide.