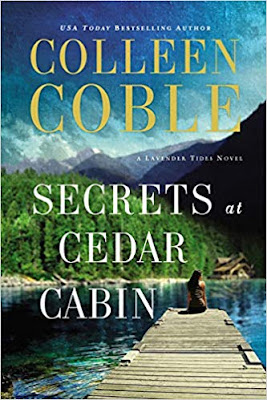 When her mother is murdered and the killer sets his sights on Bailey, she does the only thing that she knows to do; flee to a place that she has never been, with secrets she never knew existed.

Having just received the deed to a remote cabin in Lavender Tides seems providential, but Bailey Fleming is not naive enough to think that her used-to-be-fake-husband is simply being generous, it seems oddly coincidental that her mother's roots were in Lavender Tides; it is even more disturbing to realize that law enforcement has traced evidence of human trafficking to the area.

F. B. I. Agent Lance Phoenix has been investigating his sister's abduction for years. When he happens upon Bailey staying in what he thought was an empty residence, his instincts go on high alert at her vague reasons for being in the area. Posing as a carpenter, Lance takes advantage of getting to know Bailey as he assists in home repairs, but when it becomes apparent that criminal activity has taken place on the property, he goes into agent mode and vows to help her sort through her troubled past, but can he keep her safe and locate his sister at the same time? Or are the two somehow connected?

"Secrets at Cedar Cabin" is Colleen Coble at her very best, with waves of tricky plot lines to sort through and well defined characters who share just the right amount of romantic sizzle.

Running for her life in the wake of her mother’s murder, Bailey Fleming escapes to the only place she can think of—a remote, dilapidated cabin in Lavender Tides. Intending to finally get to the truth behind the lies of her past, Bailey only finds more questions when bodies are discovered near her cabin hideout along with traces of a dangerous human trafficking ring. In an unlikely partnership with FBI agent Lance Phoenix, Bailey races to understand the mystery surrounding her life and circumstances before the murderer tracks her down.

Meanwhile, Lance is determined to rescue his sister, Ava, who was abducted after running away from home as a teenager. An unexpected lead brings him to the remote cabin, and he wonders if Bailey—with her suspicious past and strange connections to his sister’s case—is really who she claims to be and if she can somehow lead him to Ava.

Filled with Colleen Coble's custom blend of suspense and romance, Secrets at Cedar Cabin takes us back to the evocative landscape of Washington's coast where nothing is quite as it seems.