BREACH OF TRUST by Rachel Dylan, Reviewed by Paula Shreckhise

Breach of Trust is the third installment in the Atlanta Justice series by Rachel Dylan. 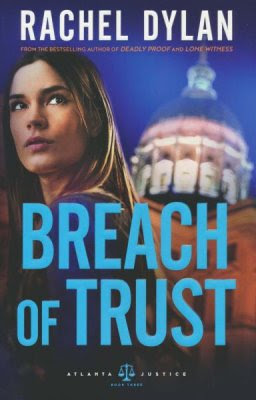 This series is about three female attorney friends from law school who remain very close. It is also about each one’s faith journey.

In this book we learn about Mia Shaw, a shocking discovery and the consequences that could prove dangerous.
Ms Dylan adeptly brings us into the world of corporate law. I learned so much from this book. The lawyer-speak was not over my head but it educated me to a side of the law I was not familiar with. It wasn’t just a lesson in procedure but an excellent who-done-it! It kept me guessing until the end.

This book can be read as a stand alone but you would benefit by reading all three in the series.

The relationships between the characters were natural and we were kept up to date on Mia’s two friends as well as introduced to a few new characters. I am hoping some of them show up in a future novel.

This was a very enjoyable foray into Atlanta and its justice system.

* I received a complimentary copy of this book from the publisher on behalf of the author. I was not required to give a favorable review. All opinions are my own. *

BackCover Blurb:
Corporate litigator Mia Shaw suffers the shock of her life when she finds her colleague and friend brutally murdered. Grief-stricken and furious, Mia vows that she will do anything to seek justice and make the killer pay.

The man accused of the murder is a friend of security tech guru Noah Ramirez, but the evidence just doesn't add up. To save his former ATF partner, Noah needs to convince Mia that the real killer is still on the loose.

Mia soon has more than the criminal prosecution to worry about, however. She is tasked with taking over her friend's last case and learns he was hiding secrets about his client. She thinks she may have stumbled upon corporate espionage that has turned deadly, but she has no idea of the danger involved. Her only ally is Noah, despite their difference of opinion on the homicide case. Can he win Mia over to his side and protect her from ever-growing threats?