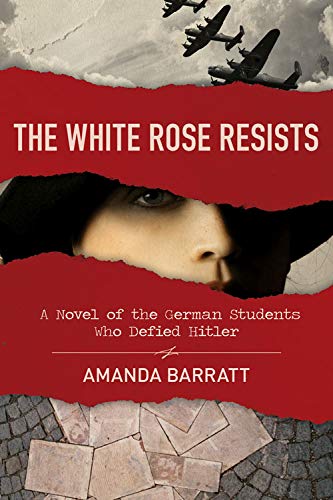 This is not your typical WWII novel. This is a behind-the-scenes look at some idealistic youth in Germany under an oppressive dictator and how they become disillusioned and try to wake the average man to action. Ms. Barratt has thoroughly researched the true story of The White Rose drawing on the leaflets, letters, diaries and interviews with people contemporary to the events. She seamlessly adds a few fictional characters into the mix to flesh out the story. Throughout the novel, she shows hope, faith and courage of ordinary people.

The White Rose Resists brought me to tears again at the injustice that was wrought during the Hitler regime. I was in awe at the lengths that these souls went to in order to bring truth to their fellow countrymen.

The story is told in turns by the members of The White Rose.

Sophie Scholl: “ There is purpose in this. In death, as in life. Someday perhaps my story will be told, and others will remember. That to witness wrong and stay silent is as much a crime as committing evil oneself. That youth does not exempt one from responsibility. That freedom is a gift.”

I am reminded of the many examples in the Bible that God reserves a remnant even when things look bleak. And that He is with that few in spite of the overwhelming odds.

Notable Quotes:
Sophie:“How can we expect righteousness to prevail if there is hardly anyone willing to sacrifice themselves for a righteous cause.”

Kirk:“The laughter of childhood is a casualty of war. Childhood itself is stolen by war’s cruel hand.”

Sophie: “Freedom looks like this sunshine. Freedom to live without fear, to speak one’s beliefs without glancing around and behind.”

Tension permeated the pages as Sophie, her brother, Hans and their friends put their plans into action. Ms. Barratt captures the heartache as the characters try to protect each other, then take responsibility for their actions. Sophie: “In spite of my exhaustion, the risk of discovery, the nagging anxiety, I wouldn’t go back to doing nothing. Pain is better than emptiness.”

Annalise: “Even the greatest darkness can be breached by the flame of a single candle.”

It was my privilege to read such an accomplished book. Ms. Barratt truly brings the past to life.
*I received a complimentary copy of this book from the publisher on behalf of the author. I was not required to give a favorable review. All opinions are my own. 5 stars plus! strong faith thread.

BackCover Blurb:
Inspired by the incredible true story of a group of ordinary men and women who dared to stand against evil

The ideal of a new Germany swept up Sophie Scholl in a maelstrom of patriotic fervor--that is, until she realized the truth behind Hitler's machinations for the fatherland. Now she and other students in Munich, the cradle of the Nazi government, have banded together to form a group to fight for the truth: the White Rose. Risking everything to print and distribute leaflets calling for Germans to rise up against the evil permeating their country, the White Rose treads a knife's edge of discovery by the Gestapo.

Annalise Brandt came to the University of Munich to study art, not get involved with conspiracy. The daughter of an SS officer, she's been brought up to believe in the Führer's divinely appointed leadership. But the more she comes to know Sophie and her friends, the more she questions the Nazi propaganda.

Soon Annalise joins their double life--students by day, resisters by night. And as the stakes increase, they're all forced to confront the deadly consequences meted out to any who dare to oppose the Reich.

A gripping testament to courage, The White Rose Resists illuminates the sacrifice and conviction of an unlikely group of revolutionaries who refused to remain silent-no matter the cost.