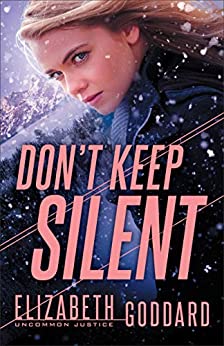 “His past followed him here, and he couldn't let it out of his sight. ~Liam”

“While she'd never been a big fan of silence—keeping quiet about wrongdoing was the worst kind of evil in her opinion. ~Rae”

I was looking forward to getting to know Liam McCade when he was first introduced in “Always Look Twice”. Trying to find his way after leaving the DEA, he runs into Reagan Burke, the investigative reporter who almost cost him his life. But how could he resist helping her find her missing sister-in-law when she asked? Maybe his heart hadn't healed after all.

What I always like about Goddard's writing is she keeps your nose to the pages with her fast-paced stories. This one picked up speed after about the halfway mark, but that certainly doesn't mean it was slow up to that point. She laid the foundation for a good story-line in the first half so that the reader could anticipate what was going to happen. Kind of like watching a scary movie where your adrenaline was pumping hard!

I liked these characters, they had depth to them and I think Goddard did a great job of making them seem real. There's a good balance of suspense and romance; I loved watching it play out between Liam and Rae. They have a lot to overcome, killers to catch, death to defy, danger to avoid and a missing person to find. Oh and the scenery was breathtaking! I'm not a skier but I could see the beauty of “cowboy powder”, the fresh snow on top of a mountain, undisturbed with an undercurrent of danger that Goddard included. The bitter cold and snow just added to the already tense story; I could literally feel it in my bones!

This book is labeled as Christian fiction and I found it to contain a (1) very light faith thread. I guess maybe I'm different than some readers in the fact that I like it stronger in the stories I read. But this did contain enough of an element that you could tell both Liam and Rae did serve God and rely on Him when danger mounted. I just wished it would have played out a bit more!

“Who could understand why life unraveled beneath them? No one. She wouldn't ask the creator of the universe why, because there would be no way to comprehend His answer. All she could do was trust Him to make a way for her. To hold her in the palm of His hand. ~Rae”

All in all, if you are a romantic suspense fan who loves a tense book, one that you have a hard time putting down, I think you will enjoy “Don't Keep Silent”! Though this is the third and final book in the Uncommon Justice series, this is perfectly fine reading by itself. Of course, I always recommend reading the whole series, it's just too good to miss!
*I received a complimentary copy from Revell on the authors' behalf and was not obligated to leave a favorable review. All opinions are my own. *

BackCover Blurb:
Investigative reporter Rae Burke will do anything to find her missing sister-in-law, even if it means facing Liam McKade, a man who almost lost his life saving hers. A former DEA agent, Liam thought he could find peace at his Wyoming ranch, but he just doesn't feel at home anywhere anymore. When the reporter who blew his cover on an important investigation inserts herself back into his life, he's less than thrilled. But Rae's keen investigative skills have led her down the right path--and directly into the dragon's mouth--leaving Liam no choice but to protect her. As the danger increases, the past they both tried to flee catches up to them, along with the feelings they once had for each other.

Bestselling and award-winning author Elizabeth Goddard plunges you into a fast-paced, high-stakes story of honor, forgiveness, and justice.