UNVEILING THE PAST by Kim Vogel Sawyer, Reviewed by Rebecca Maney 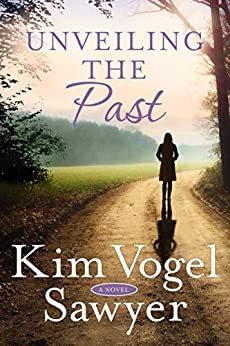 "How do you know when God's telling you to do something? I mean, in the Bible it was so obvious. A burning bush, a talking donkey, angels who showed up and delivered messages. God doesn't do those kinds of things anymore."

Cold case detective Meghan DeFord-Eagle has so many questions circling through her head; does she dare contact her absentee father, should she and Sean start a family, could they open up a private investigative agency . . . . . could, should, would, maybe, might . . . . or not. It's a heavy burden for one half of a new marriage to bear.

As if these decisions were not enough, Meghan and Sean's supervising officer asks them to temporarily split their partnership, so that each of them can work with another detective, (up until now, they have worked as a team) to solve a case that exhibits distinctive connections. In spite of the fact that neither is particularly keen on the idea, the department is handling two scenarios that demand the Eagle's expertise. As it turns out, it was the best decision they could have made.

Meanwhile, Meghan's mother and grandmother are becoming involved in a situation as unique as any cold case that Meghan and Sean could be assigned, and just as personal.

This novel has a rather complicated mixture of plot lines, so much so that the reader may feel a little left out of the details from time to time; none of the story threads reign supreme, but they do weave themselves together rather nicely in the end. It's the wonderful spiritual depth that marks "Unveiling the Past" as a decidedly inspirational read.

"Our structures, our lives are doomed to collapse unless we build on the cornerstone, Jesus Christ."
* 3.5 stars. I purchased this book and was under no obligation to provide a positive review.

BackCover Blurb:
Mysteries, family secrets, and the love of a true Father are found at the heart of this gripping novel from the bestselling author of Bringing Maggie Home

Newlyweds Sean Eagle and Meghan DeFord are no strangers to pain and loss. As cold-case detectives, they know intimately the anguish family members endure after the murder or disappearance of a loved one. But when a new case hits too close to home, it threatens to pull loose the fragile cords of their young marriage.

Sheila Menke was just a girl when her father left for work and never returned. An investigation revealed he had embezzled enough to start a new life elsewhere, but Sheila could never accept the court’s criminalization of her father. Meghan reluctantly takes the case, secretly fearing it will stir up buried feelings about her own biological father. And while Sean investigates the mysterious death of two young brothers, he longs to start a family. But Meghan worries that with a negligent mother and an absentee father as her parenting examples, she might never be fit for motherhood.

As they delve deeper into the past, both Meghan and Sheila must choose to either stumble along the road of bitterness and resentment or walk the difficult path toward forgiveness and healing. When the cases begin to break wide open, these young women are poised to discover that while earthly fathers may fail, there is one in heaven who is a father to the fatherless.