A LIFE ONCE DREAMED by Rachel Fordham, Reviewed by Paula and Trixi 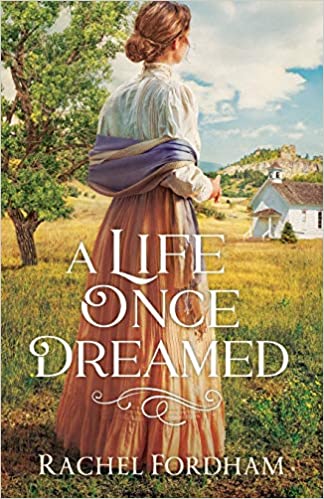 PAULA'S REVIEW:
Agnes Pratt and James Harris were childhood friends and had marvelous dreams together. But Aggie threw them all away and fled from Boston for Penance, Dakota Territory.

Aggie has become a teacher in a one room schoolhouse. All her anxiety returns when James comes into town as the new doctor. Neither has forgotten the other. James is a patient, steadfast man and would like nothing more than to make old dreams a reality. But dreams never stay the same.

Ms. Fordham has crafted a cozy town in Penance with likable townspeople. They run the gamut from nosey matchmaking friends to a loyal Mayor to Old McHenry who was the closest thing the town had to a doctor. The children at the school are endearing, even Tommy who asks outrageous questions.

You can feel the uneasiness and worry Aggie has when she does not want to reveal why she left Boston. Likewise, you can feel the profound love Aggie has for an orphan child. It is good to remember that: “Where you come from matters far less than where you are going.”

There are lessons to be learned from Aggie and James and their struggles:

Sometimes God has a better plan.

You should not judge a person by their background.

God can give a mother’s love when a child is in need.

*I received a complimentary copy of this book from the Revell Reads Blogger Program. I was not required to give a favorable review. All opinions are my own.* I give this 4 stars. Solid but not blatant faith thread.

TRIXI'S REVIEW:
“This was her life. Colorful and simple. Comfortable and predictable. She'd woven herself into the fabric of the town, serving and loving the townsfolk and making a life for herself in Penance.”

I really admired Aggie's determination to make a new life for herself far away from her parents and all she ever knew in Boston to become a school teacher in the Dakota Territory. Her strength of character is what makes her the woman she is. Deeply investing in her students and the townspeople in whatever way she can, she finds contentment. That is until James Harris—her long ago fiancé and the only man she ever loved, shows up to answer the newspaper ad for a town doctor. Could the life she once dreamed become reality, or will the past hurts and secrets keep her heart locked up forever? As for James, he hasn't lost the love he once had for Aggie—if anything—it has grown over the years. And he's determined to find the answers as to why she left him six years ago, in hopes of convincing her to start over again. He's an ever-patient gentleman, a compassionate doctor and a loyal friend.

Both James and Aggie had a lot of growing up to do in this story. I really like how the author stretched them in ways that molded the kind of people they eventually became. Watching them overcome their past to forge a new future was one I enjoyed. Second-chance love or reunion love is one of my favorite tropes in a book, so I was especially fond of this story. In my opinion, seeing characters work through what tore them apart only makes for a stronger relationship in the end. I also loved the townspeople, there were many who contributed their own personality to the mix and helped impact both James and Aggie. A well-rounded cast of characters is what makes a good story in my book!

Lastly, the spiritual nuggets throughout were fun to find and great reminders to myself as a Christian. Even if our long-ago dreams don’t ever become reality, God can still make beauty out of the ashes of the past. I really love the new life He forged for Aggie and James! When an author has a good faith thread in a story and it reflects in the characters, that’s my most favorite part. Not only am I reading for entertainment, but also to feed my soul! I recommend this to inspirational historical fiction lovers and those who enjoy second-chance love stories.
*I received a complimentary copy from Revell publishing and wasn't obligated to leave a favorable review. All opinions are my own. *

Back Cover Blurb:
Six years ago, a shocking secret sent Agnes Pratt running in search of a new start. She found it in Penance, a rugged town of miners and lumberjacks in the Dakota Territory, where she became Miss Aggie, respected schoolteacher and confirmed old maid. But the past has a way of catching up with people.

When childhood friend and former sweetheart James Harris accepts a position as the town doctor, Aggie's pleasantly predictable days suddenly become anything but. James wants to know why Agnes left behind the life they had dreamed of creating for themselves--but he is the one person who can never know.

In the shadows of the Black Hills, can a healing light be shed on the past? Or will the secret Agnes can't seem to outrun destroy her chance at happiness?

Fan-favorite Rachel Fordham brings to life the dusty streets of an 1880s frontier town in this story that affirms where you come from matters far less than where you're going.