A BRIDE OF CONVENIENCE by Jody Hedlund, Reviewed by Rebecca and Winnie 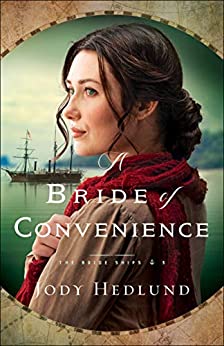 REBECCA'S REVIEW:
"Are you marrying me?"

And thus began a tale of two hearts, who might have been joined under the most unusual of circumstances, but joined they were and joined they were going to stay. Possibly. Maybe. Hopefully.

When bride-ship bride Zoe Hart accepted responsibility for a wee babe, she never imagined that becoming the wife of the local pastor Abe Merivale would be necessary, much less reality; Zoe had thought to take her chances on someone else. The "someone else" didn't take kindly to having his almost wife snatched away from him, and so following their hasty nuptials, Zoe and Abe quickly retreat farther up into the mountain mining communities of British Columbia. . . . . and begin their polite, platonic life.

Determined to follow the traditions of the Anglican Church, Abe knew he was jeopardizing his chances of career advancement by joining his life with a former cotton mill worker and a mixed race infant. What had he been thinking? Actually, under the circumstances Abe hadn't been thinking clearly at all. But he had taken his vows before God and was determined to become a good husband; to the most beautiful woman he had ever seen, and who was quickly becoming the most precious.

Seemingly, Zoe and Abe have a lot to learn about discerning God's will for their lives, for "Beautiful things usually coexisted with pain and danger. The two walked hand in hand on the same path, and the contrast only made the beauty and joy all the greater."

It's been a long time since I have enjoyed a marriage of convenience story this much.
*I purchased this book and was under no obligation to provide a positive review.

WINNIE'S REVIEW:
Set in British Columbia in 1863, A Bride of Convenience is an imaginative and colorful peek into a fascinating slice of history. Jody Hedlund is a master at creating vibrant, multi-layered, and realistic characters and placing them in compelling and intriguing situations. Zoe Hart is courageous and compassionate and is a perfect match for the kind and caring Pastor Abe Merivale. I loved their almost instant connection and enjoyed watching their attraction and relationship grow through their trials. With a captivating cast of characters and a gripping plot, this story kept me enthralled and turning the pages. Hedlund’s descriptions were so vivid that the story came alive, and I could easily picture the action in my mind.

Filled with adventure, intrigue, danger, suspense, and a dash of romance, this tale has a little bit of everything. Woven throughout are threads of faith, hope, trust in God, and the courage to stand for right. This is the third in The Bride Ships series featuring ladies who journeyed from England to British Columbia to hopefully find husbands and a new life. It can be read as a standalone book, but it was enjoyable to catch up with some of the characters in the previous books. 4.5 stars
*I voluntarily reviewed a complimentary copy from Bethany House Publishers and NetGalley. All opinions are my own.