THE BLACK ROSE (Empire in Pine #3) by Naomi Musch, Reviewed by Paula Shreckhise 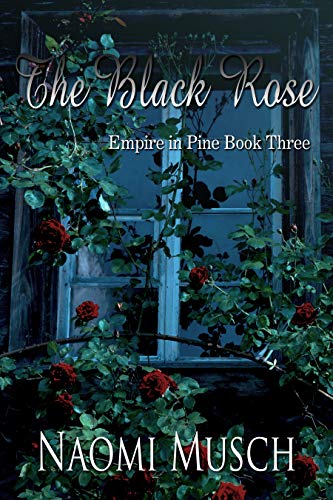 Having not read the first two books in this series, this one was still an enjoyable story. A hard story, too. It started out with deceit and betrayal but ended on a note of reconciliation and forgiveness. It showed how a faith in God can overcome even bad circumstances we put ourselves into.

I liked that it was set in Northern Wisconsin, where I lived for eleven years. It also referenced the Peshtigo Fire, which happened the same day as the Great Chicago Fire. The second book is the Peshtigo story. I have visited the Peshtigo Fire Museum, a small but fascinating place.

The writing was realistic and showed the characters struggling with their faith, but in the end God is in charge and guides them into what is best for them.
*I received a complimentary ebook from the author. I was not required to give a favorable review. All opinions are my own.*4stars and a solid faith thread.

BackCover Blurb:
1893 ~ Logging has reached its golden era in the growing state of Wisconsin, and twin sisters Jesilyn and Corianne Beaumont enjoy a comfortable life with family in the bustling, Great Lake city of Superior—until jealousy incites Jesi to seduce Cori's fiancé, certain she can claim his heart. When things don't go as planned, a flight and fall from grace lands her in a boom town brothel where a fresh start is denied her.

Camp preacher Paul Winter longs to offer hope in the carousing lumber and mining towns of northern Wisconsin, but his successes have been few, and he’s begun to question his calling. Then his ministry is challenged in an unexpected way when he meets a lost and broken red-head he calls Pie Girl. Though willing to offer rescue, he's never had to battle his own longings quite this way before.

Meanwhile, stung by Jesilyn's betrayal, Corianne finds refuge in refusing to forgive, but bitterness might separate her from a second chance at happiness.

When tragedy causes fresh sparks between them, will love fail forever? Or is there a way for both women to begin new lives—and find budding love blooming in places neither of them expect.
Long Lake Books, May 2020
Available in digital ebook and paperback:
Buy The Black Rose at Amazon
Posted by Debra E. Marvin at March 29, 2021