THE LADY IN RESIDENCE by Allison Pittman, Reviewed by Rebecca Maney 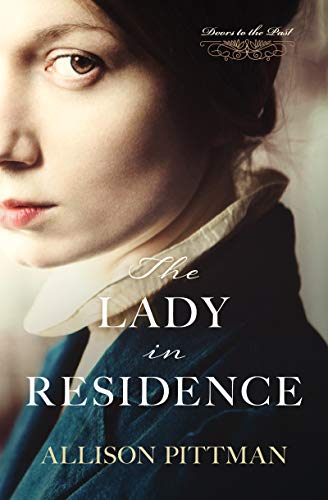 "I am known, affectionately, as the Lady in Residence."

Like the characters themselves, this book has a mind of its own, taking readers deep into unknown territory while maintaining an atmosphere of authenticity and tenderness that is both unexpected and altogether endearing.

For instance, consider Hedda Krause; young, widowed, trying to navigate a new existence; fleeing the home of her deceased husband and his mangy sons, ending up as a resident of the glamourous Menger Hotel in San Antonio, Texas with a trunk full of clothes, valuable jewelry, and a reasonable amount of cash. Perhaps lured into thinking way too much about the local lore surrounding the horrific death of an hotel employee Sallie White, (whose unfortunate demise by the hands of her lover took place in front of the Menger), she begins to feel Sallie's presence in more ways than one.

Years later, a lovely young illusionist moonlights as a tour guide for the Alamo Haunting Spirits Ghost Tour. She too is a bit obsessed with the cruel details encircling the spirit of Sallie White and the widow who supposedly lost all of her earthly possessions to the wraith. When an unassuming high school math teacher crosses her path carrying a box full of his great-great-grandfather's memorabilia about Hedda Krause, Dini Blackstone sits up and takes notice, for Quin Carmichael's ancestor was none other than the detective who was assigned Hedda Krause's case.

Quite frankly, the uniqueness of both timelines is stunning. Each and every character, whether real or imagined, exudes depth. They impressively maintain their individual ambience; adding rich flavor, clever provocation, and raw emotion, literally making the story come to life. Never mind trying to figure it all out, I am not even certain they knew what was going to happen next until, like their readers, the final page was turned.

*I purchased a copy and was under no obligations to review. 4.5 stars

BackCover Blurb
Can a Legacy of Sadness be Broken at the Menger Hotel?

Young widow Hedda Krause checks into the Menger Hotel in 1915 with a trunk full of dresses, a case full of jewels, and enough cash to pay for a two-month stay, which she hopes will be long enough to meet, charm, and attach herself to a new, rich husband. Her plans are derailed when a ghostly apparition lures her into a long, dark hallway, and Hedda returns to her room to find her precious jewelry has been stolen. She falls immediately under a cloud of suspicion with her haunting tale, but true ghost enthusiasts bring her expensive pieces of jewelry in an attempt to lure the ghost to appear again.

In 2017, Dini Blackstone is a fifth-generation magician, who performs at private parties, but she also gives ghost walk tours, narrating the more tragic historical events of San Antonio with familial affection. Above all, her favorite is the tale of Hedda Krause who, in Dini’s estimation, succeeded in perpetrating the world’s longest con, dying old and wealthy from her ghost story. But then Dini meets Quinn Carmichael, great-great-grandson of the detective who originally investigated Hedda’s case, who’s come to the Alamo City with a box full of clues that might lead to Hedda’s exoneration. Can Dini see another side of the story that is worthy of God’s grace?
Barbour Publishing, February 2021
Available in digital ebook, paperback, and audiobook:
Buy The Lady in Residence at Amazon
Buy The Lady in Residence at Christianbook.com
Posted by Debra E. Marvin at March 15, 2021