STAY WITH ME by Becky Wade, Reviewed by Trixi Oberembt 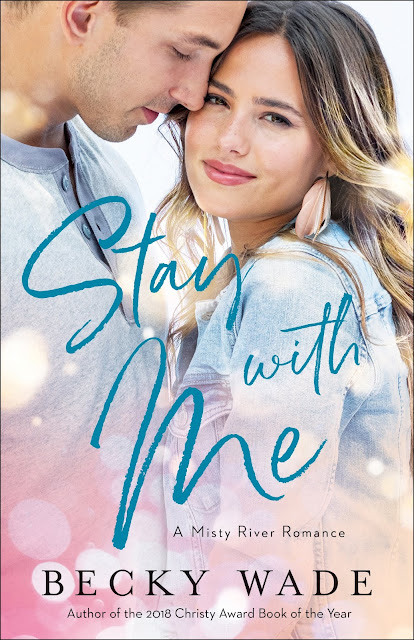 This is one of those stories that's so difficult to review because I don't want to give a single thing away, but at the same token, want to portray how powerfully impactful it is! It's deeply emotional, thought-provoking, and resonates with so many spiritual truths that they slammed into my heart. The end sucker-punched me, stole my breath, and left tears trickling down my face...but wow, some seriously good stuff. I won't walk away from this unaffected but reminded in such a powerful way just how much God loves me; in spite of my mistakes, in spite of times where I’ve turned away from God, in spite of my doubts and fears, in spite of how stupidly human I can be sometimes.
Okay, whew, I still can't catch my breath, but I'll try to finish my review on this beautifully written story. There were times where I felt so entrenched in this that it became real, the characters felt real, and everything around me dissipated except the world in the pages.
Becky Wade has a way to weave her words so that the reader can connect to the story practically right away. At least it does for me with every book I've read by her. I'm a fairly new fan, having just discovered Wade's writing through her recent Bradford Sisters series. So when this new one came out, I was almost desperate to read it! I knew I was in for a real treat and Wade did not disappoint.

I was fully invested in the lives of Genevieve and Sam as soon as he found her passed out in his guesthouse. These two are deeply layered characters and Wade had a way of peeling back those layers to lay bare the deep-seated struggles and issues they've hidden for years. Also, the family secrets that Genevieve and her sister Natasha have come to investigate after threatening letters arrived at their parents house kept me on tenterhooks. I could not believe what was revealed at the end!
Emotions ran high for me throughout the book and I had such a hard time putting it down. Wade also introduces other members of what's called “the miracle five”; five teens on a missionary trip who survived an earthquake 18 years ago. What they went through is sprinkled throughout the book. I can't wait to learn more about Luke, Sebastian, and Ben!
In conclusion, Wade consistently delivers spiritual truth, emotions so real you can feel them, flawed characters redeemed by God's mercy, a love story that's deep and abiding, and an overall satisfied feeling that leaves you smiling at the end. If this first book in the Misty River Romance series is any indication of what's to come, I cannot wait for the rest!
*I received a complimentary digital copy through Netgalley and was not obligated to leave a favorable review. All opinions expressed here are my own. *
See Nicole's Review
Back Cover Blurb:
Loving her is a risk he can’t afford . . . and can’t resist.

When acclaimed Bible study author Genevieve Woodward receives an anonymous letter referencing her parents’ past, she returns to her hometown in the Blue Ridge mountains to chase down her family’s secret. However, it’s Genevieve’s own secret that catches up to her when Sam Turner, owner of an historic farm, uncovers the source of shame she’s worked so hard to hide.

Sam has embraced his sorrow, his isolation, and his identity as an outsider. He’s spent years carving out both career success and peace of mind. The last thing he wants is to rent the cottage on his property to a woman whose struggles stir his worst failure back to life. Yet, can he bear to turn her away right when she needs him most?