THE PRINCE OF SPIES by Elizabeth Camden, Reviewed by Rebecca Maney 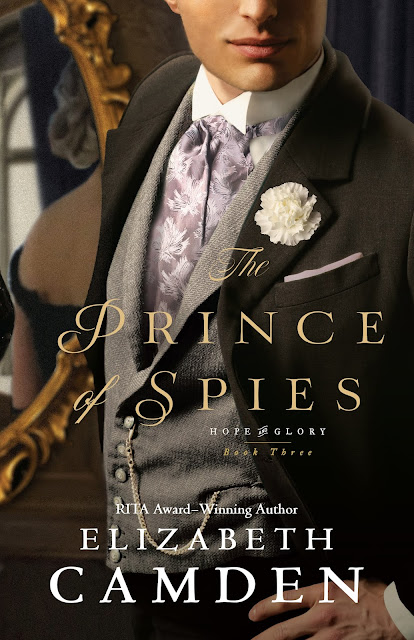 "Amazing women have inspired men from the dawn of literary history. Cleopatra, Helen, Guinevere, Juliet, and Dulcinea. To these legendary heroines, I add my own, and her name is Marianne."

What kind of girl risks life and limb to rescue an innocent little canine struggling to crawl out of a frozen river? "Aunt Marianne" would, and since that is the only name that Luke Delacroix can ascribe to the beautiful creature lying beside him on the ice, he is going to have to rely on the fact that he is the prince of spies and should be able to find her again in a matter of hours. Besides, how many young women with the name Marianne work for the Department of the Interior as a photographer. . . . . in a cruel twist of fate, the name Luke discovers is enough to make his blood run cold . . . how could it be? She is a Magruder.

"What a handsome man. Black hair, dark eyes, and a face animated with both fear and admiration."

He literally captures her heart with his eyes, this man on the ice, . . . . . "even through their gloves, it felt like a spark of electricity hummed between them", so powerful was their oddest of first meetings. First . . . because there were going to be many, many more forbidden rendezvous between Luke and Marianne; beginning in a dark room and ending in a yarrow field. . . . . unfortunately, the road in between was going to deliver more detours and blind spots than most humans could endure. Buffeted by a long standing family feud between their two families, the path to happiness was going to require an insatiable, undeniable, uncontrollable, unconditional love. And what a love it turned out to be!

Author Elizabeth Camden has managed to capture the heart of her readers in the palm of her hand, penning a romance for the ages, for this outstanding conclusion to the Hope and Glory series will undoubtedly receive the highest honor that a reader can bestow upon a story; the desire to read it over and over and over again.
*I received a copy of this book from the author and publisher. The opinions stated above are entirely my own. 4.5 stars

BackCover Blurb:
Luke Delacroix has the reputation of a charming man-about-town in Gilded Age Washington, DC. In reality, he is secretly carrying out an ambitious agenda in Congress. His current mission is to thwart the reelection of Congressman Clyde Magruder, his only real enemy in the world.

But trouble begins when Luke meets Marianne Magruder, the congressman's only daughter, whose job as a government photographer gives her unprecedented access to sites throughout the city. Luke is captivated by Marianne's quick wit and alluring charm, leading them both into a dangerous gamble to reconcile their feelings for each other with Luke's driving passion for vital reforms in Congress.

Can their newfound love survive a political firestorm, or will three generations of family rivalry drive them apart forever?