TRIAL AND ERROR by Robert Whitlow, Reviewed by Rebecca Maney 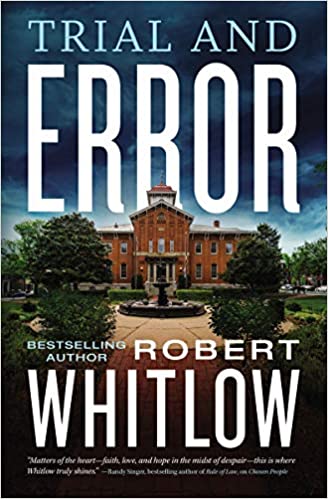 "If I'm honest about it, my life has been a succession of trials and errors - a lot of false starts, wrong turns, and dead ends. I press on, but I've always felt stuck, and I want to get unstuck. Does that many any sense?"

It makes a lot of sense, especially since Buddy Smith's life has taken the sorts of twists and turns that many men would have written off as simply bad luck. Still desperate to find his now teen-age daughter, snatched away by her mother shortly after birth, he has channeled that determination into his law practice, tirelessly advocating for families who are missing a child due to unforeseen circumstances. When a well connected Milton County family is devastated by the disappearance of their own high school daughter, Buddy doesn't hesitate to lend assistance; along with a fairly new local detective and a long time acquaintance, County Clerk of Court, Gracie Blaylock.

Gracie Blaylock has secretly admired Buddy Smith for what seems like forever, albeit from a distance. Their lives intersect occasionally on a professional basis, but her high school crush on the man has long been squashed by the lack of any reciprocation on Buddy's part. However, when a member of her girls softball team goes missing, Gracie doesn't hesitate to get Buddy involved. Who would have thought that unraveling a local disappearance would have any bearing on the deepest burden of Buddy's heart, . . . . . in fact, would anyone have guessed that the entire experience would end up transforming Buddy's heart. For Gracie's words of blessing over a meal and subsequent prayer on his mother's front porch, ushered in a blessing that only God could have orchestrated in Buddy Smith's life.

"Tears began to stream down Gracie's face . . . God had touched Buddy Smith. And Gracie was there to behold it."

You may think portions of this story are left unfinished. Perhaps so. But consider that the un-finishing might represent the opening of a door. . . . a door that every reader is invited to enter; for this book boldly represents issues that many people are facing with fear and trepidation; may they one day look back on them with unabated joy, for the power of prayer is a beautiful gift of the Spirit.
*I purchased a copy of this book and was under no obligation to provide a review. 3.5 stars

BackCover Blurb:
A small-town lawyer has been searching for his daughter for eighteen years. Now another young woman is missing, and he’s determined to find them both—no matter the cost.

Buddy Smith built his law practice around tracking down missing children. After all, he knows the agony of being separated from a child. Not long after his daughter’s birth, her mother ran away and Buddy never saw either one again.

Gracie Blaylock has known Buddy her entire life, and now that she is clerk of court for the county, their paths cross frequently. When Gracie hears that a teenager in town has gone missing, she knows Buddy is the one for the case.

The girl’s parents are desperate for answers. Together with Gracie and Mayleah—the new detective in town—Buddy chases all leads, hoping to reach the missing teen before it’s too late. And as he pursues one girl, he uncovers clues that could bring him closer to the girl he thought he lost forever: his own daughter.

Master legal writer Robert Whitlow will keep you guessing in this gripping legal drama while reminding you of the power of God’s restoration.