Most writers of romance fiction will acknowledge there is a formula to our stories. Different writers define their formula in different ways, but almost every story teller, whether sharing a romance, a mystery, a literary work, or any of the hundreds of sub-genres within those basic plots, follows a similar structure. Here is one I am currently using in my fiction (Compliments of Susan May Warren and Rachel Hauck, Inside Out):

Life: The ordinary lives of the characters.

Inciting Incident: Something that forces the characters to act, to choose
a path that sets them on an adventure.

Noble Quest: That special something the main character is compelled to
seek.

Disappointment: Most of a story is made up of a series of setbacks…

Y in the Road: …and the decisions the characters make in response to
those setbacks.

Help! (Black Moment): Until the character(s) reaches a point at which all
appears to be lost.

Overhaul: So the character(s) must alter their perception, change their
goal to what matters most.

Here is the story of my true life romance:

That November day in 1991 started out like any other in the previous four months. I’d wake up, look over at my new husband, and wonder what on earth I’d done. 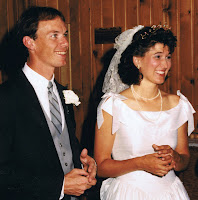 I loved him. I thought I did. I knew I did. After all we’d been through to be together, I’d better love him. Right? And then I’d contemplate the next forty or fifty years living with this stranger next to me and the breath would leave my lungs. I felt like someone had dropped a cement block in the middle of my chest.

What I didn’t know then, but would come to realize when I started writing fiction, is that on our wedding day my husband and I had not yet reached the end of the story. The Happily Ever After required of romance novels was not yet ours. We had only reached Help! And on that November day, my personal Black Moment was about to invade my life.

Let’s back up a bit, so you get a bit of context.

Life: I prepared dinner in the duplex apartment I shared with three other university students when the doorbell rang.

Inciting Incident: One roommate dashed to the door. “I forgot to tell you I invited this poor guy to stay. He’s stuck working out in Podunk for four months, so I offered him our spare room any time he wanted to come to the city.”

A few minutes later a tall, lean man with round glasses introduced himself as Andrew. He was shy, cute in a nerdy way, and not at all my usual type. But something happened when my gaze met his and he politely shook my hand. I wanted him to be my type!

Nobel Quest: Three months later Andrew was about to leave Canada to return to his home in South Africa. He’d been conscripted into the South Africa Defense Force and could not avoid the call unless he was willing to say goodbye to South Africa for good. We sat up talking, and talking, and talking. By morning both of us were stunned. Not only did we share a lapsed faith, we shared common desires for our lives. He left and the letters (no email back then) started. Was our relationship ordained to be?

Disappointments: Over the next eighteen months, we corresponded almost daily. While I was working in London, England, I took a month to travel to South Africa (one of those Y’s—I gave up biking Australia). We fell in love. But I had to complete two more classes to finish my degree and had a job commitment in Canada’s arctic from May to August. Andrew was stuck in the army, facing service at the Angolan border. I returned home, finished my classes, and went to a remote community at the Arctic Circle.

I had numerous opportunities in the Arctic in my field (Political Studies) and while there someone else who was wooing me with determination. And I had no commitment from Andrew. Just a request issued months before that I move to South Africa to see if our relationship had a future. Remembering our shared Noble Quest, I booked tickets for a six-month stay in South Africa. My parents and brother used every argument in their power to dissuade me from going.

With the unraveling of Apartheid, Andrew had his National Service shortened to 18 months. By the time I arrived, Andrew was out of the army and had set up a digs (a shared house) with one other female and two other guys. I was welcomed into the fold.

I had no trouble securing a work permit, and despite my lack of Afrikaans, had a dream job at an Art Museum. We began to plan our wedding, to take place in Canada in July, almost a year after my arrival in South Africa. We were young, in love, and confident. We shared our faith and common goals. We knew love was a decision, and were both committed to living that out in our married life.

Help!: We returned to South Africa and my doubts crept in. I don’t know if it was Andrew, or the enormity of our commitment, or being so alone and so far from home again, but I was in a low grade crisis.

And then, that day. My Black Moment.

I came home from work to find my husband there ahead of me. Not unusual in itself, except he sat on the couch, his expression bleak. He pulled me to his side, swallowed so hard I saw his Adams apple work while he gathered the courage to tell me what happened.

That day at the township hospital where he worked as a staff physician in the pediatric ward, he had a needle stick injury. The baby was HIV positive.
This was 1991. At the time, HIV infection was an automatic death sentence. Treatments were in their infancy and data on transmission in a healthcare setting was limited.

Not only was my life potentially at stake, so many of my dreams were too. Could we have a family if Andrew contracted AIDS? Could I support us both if he became sick? Would it be possible for him to immigrate to Canada? I faced these questions: Do I stay in this marriage that is so new, and I’m so unsure about? Or do I go, now?

Overhaul: The decision I made that day has impacted every part of our lives since. There have been lots of times when marriage hasn’t been easy. We’ve had plenty of setbacks along the way. But because of my black moment, I KNOW what matters in this life. I KNOW that no matter what the risk or the cost, I love my husband. And I trust God with my future.

Perfect Ending: Andrew took a course of AZT, a new treatment then, and was ill every day for the next four weeks. We decided to start a family right away, we immigrated to Canada, and embarked on a challenging and rewarding life together. Two years after the initial injury we knew Andrew wasn’t HIV positive, and were relieved and thankful. (For South Africa, HIV and AIDS continues its devastating rampage.)

Many people assume that the Happily Ever After in a romance is unrealistic, but what critics often miss is that a HEA is only possible if the heroine and hero first experience their Help! Black Moment. The best stories imitate life. The best stories recognize that Happily Ever After isn’t a final event, like Cinderella’s wedding, it is a decision that is won by trial by fire. And I also want to acknowledge that in life, not every HELP! Black Moment leads to a fairy tale romantic ending.

The formula in a modern romance can be a mirror in which we glance to make sense of the patterns in our lives. We read fiction not just to escape, but to see characters wrestle with life and win their reward.

I encourage you to look at your own life and apply the above fiction formula to it. Can you see how art imitates life? If so, or if not, drop a comment and share your thoughts on the “formula.”

Any comment, related to the topic or not, will be entered to win a $10 Amazon gift voucher if you leave your email address. Use a format that won’t invite spammers i.e. name [at] domain [dot] com.