As a lover of both tea and Jane Austen, (1775-1817), I can't resist picking up books with either of those subjects in the title. Kim Wilson’s Tea with Jane Austen is a double whammy for me, as it delves into the role tea played in Jane’s life and novels. Here's a bit of what I learned about the serious business of tea in Jane's day.
The ritual of tea has changed a bit since Jane enjoyed it. For one thing, she wouldn’t recognize a tea bag. Tea (green and black) was sold in bulk quantities of loose leaves, and she preferred to purchase hers from Richard Twining’s tea warehouse in London. The unquestionable quality and superior taste were worth paying for, even though government-imposed taxes on tea (and around two thousand other items) made it quite expensive.

Jane could have procured tea from a local shop or a traveling salesman, but sometimes tea came from questionable sources. Unscrupulous sellers might offer "smouch," a mixture of tea and other leaves which had been steeped in sheep's dung and toxic green vitriol, which supposedly gives it the appearance of real tea. (One tries to avoid thinking about the taste.) A bit less nasty was the practice of servants selling their employers’ used tealeaves. It is little wonder that those less able to afford pure tea resorted to acquiring smuggled tea, though many didn't care for it. Aside from the the fact that smuggling was illegal, the tea apparently gave off an unpleasant smell, having been packed in oilskin pouches to protect it from seawater en route from the continent. No wonder Jane liked to go right to the source.

Once purchased, she locked her tea away from thieves in the dining parlor cupboard at Chawton, the home where she wrote Mansfield Park, Emma, and Persuasion, and revised Sense and Sensibility and Pride and Prejudice. 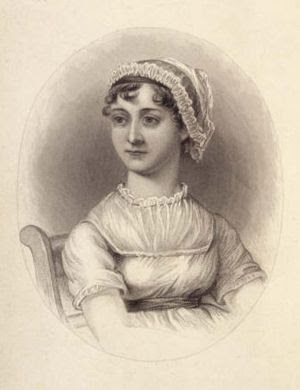 Image via Wikipedia
Jane enjoyed numerous opportunities to take tea during any given day. Every morning, she brewed the family’s breakfast pot. She might enjoy another cup while calling on neighbors or visiting higher-end establishments. If her errands were more mundane, she could stop in at a pastry cook’s for an invigorating cup. On evenings out, tea was offered at formal parties, but as she spent most evenings at home, Jane would have enjoyed her after-dinner cup with bread and butter. If her family invited friends to join them for an evening comparable to our coffee-and-dessert, the company might enjoy cards, music or parlor games with their tea.

Afternoon tea as we know it today came about after Jane Austen’s time. The story goes that in 1840, Anna, Duchess of Bedford invited friends to join her for tea and snacks (and one imagines a bit of gossip) as a pick-me-up between breakfast and dinner. Though afternoon tea is therefore not in the style of Jane Austen, I believe that she might have enjoyed it, especially if it included clotted cream.

According to the Jane Austen Centre (www.janeausten.co.uk), clotted, or Devonshire cream has been enjoyed in England since the 1600s. It’s essential to a “cream tea,” spread on warm scones with strawberry jam, but in America, it’s only available in specialty stores.

However, many good “mock” clotted cream recipes exist and my favorite comes from my friend Arlena. In the spirit of Jane Austen, I’d like to share the recipe with you. This cream is indulgent, both in price and calories. But it’s a scrumptious treat, the perfect accompaniment to tea and scones. Or a plain old spoon.

After you read the recipe, I'd love to hear about the most indulgent thing you've ever eaten. Let me know in the comment section, and don't forget to leave a comment by 9 pm PST , Oct 8, to be entered to win the prize for today, an Inkalicious recipe book! Please protect yourself from spammers trolling the internet by providing your email addy in a form like this: name [at] address [dot] com. 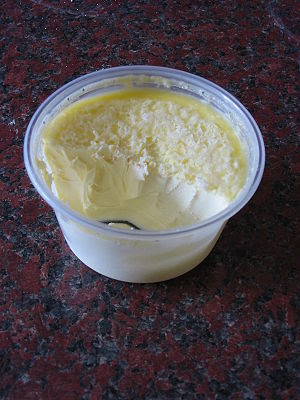 Beat the ingredients in an electric mixer until the mixture looks like softly whipped cream. Refrigerate until ready to use.