My Favorite Place on Earth is a Rock Pit

Okay, I guess I should rephrase that title because my favourite place on earth is at home with my family, but I want to tell you about my favourite 'away' place.

When I was a kid, my mom used to tell me girls weren't supposed to have their pockets full of rocks. I didn't understand why and it didn't stop me from picking up every pretty rock I found. I was fascinated by their shapes, lines and colours. I didn't know why they looked that way, I just knew that's the way God made 'em and I was going to enjoy looking. That was almost half a century ago and now it's my husband who shakes his head when I empty the rocks from my pockets.

But I've learned something in all those years of rock collecting . . . even rocks change over time. When you think of a rock, you think of something solid, built to last, like the parable about the wise man building his house on rock. And the house built on rock will last

hundreds of years but over thousands of years, the rock itself will change. Here are some examples of rocks that have changed over time. By the way, I found all these rocks in the Souris Rock Pit in Southwestern Manitoba.

This first one is a piece of 2"x2" petrified wood. See the round circles? I have no idea what they are but it's on a knobby on one corner of the rock. And yes, petrified wood is a rock. It used to be wood and you can see the woodgrain texture, but over time, it 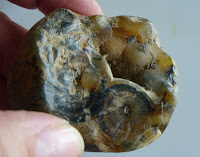 has petrified and is now a rock. You can see I'm not a geologist so I can't tell you what or why, I can only show you the result.

This next one is becoming agatized. During the process, some type of snail like creature fossilized in the rock - see the bottom right. Although not opaque when held up to the light, it is still considered an agate. 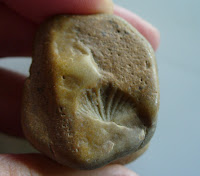 Here's a shell fossil in a piece of mustard jasper. I really like this rock because the edges are round and smooth.

The next one is another favourite. I really don't know what caused the impressions on this agate, but it looks like some small lizard or something became fossilized, doesn't 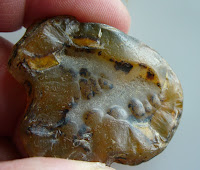 it? I mean, it really looks like a mouth and teeth. Can you imagine if it was from a baby dinousaur?


The next one is what they call a porous rock. It has these little holes all over it. And then something made a round donut-like impression. I don't know what did it but I think it's really cute.

Then we have a really big agate which is as long as my index finger. It looks like a weird coloured piece of wood except for the waxy shine which is a characteristic of all agates. And you can see the petrified wood markings - almost as if it's still a log.

This piece was one of those accidental finds over a dozen years ago. I'd finished for the day and was walking back to the vehicle when I spotted the waxiness right there on the hard packed parking area. I decided to dig it up and it's still once of my choicest finds.
Next is a 2" piece of mustard jas

per with what looks like teeth on it. Jasper is a semi-precious stone and the Souris Pit has lots of both the red and yellow (mustard) colored pieces. But the white spots are shiny like little pearls. Of course they're not pearls or teeth but it's nice to imagine, eh? 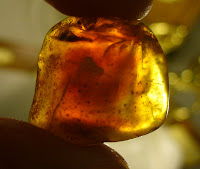 The next 2 photos are of a small (under 1") agate. This is a nice example of an agate because if you look close, you'll see a little triangular shape embedded in the agate. Sometimes, agates will have ferns or mosquitos inside. When you go rock hounding in an agate pit, you'll see people holding up their rocks to see how clear the inside is. If you can't see through it, it's not an agate yet. 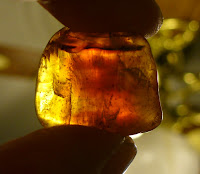 In my house, I have some of my rock collection out in the open where everyone can see it. Every day as I pass it, I think of the wonders God has created. That's what got me started collecting rocks. But now, it's so much more.
You see, as a child, I believed God made the rocks the way I found them. But He didn't. He created a magnificent world where everything changes from the rocks to us, his most precious creation. And even if I resist change, it still happens. My thinking changes as I broaden my education. And my heart changes as I love and live and grow closer to God.
And even during those years of being a backslider when I thought I was lost , God was there, watching and waiting. He knew I was changing because everything changes. There is only one constant and that is God's love. God's love for us will never change.
But if God can change a piece of wood into a translucent rock, just think what he can do with you.
The Souris Rock Pit is located in the town of Souris, Manitoba in Southwestern Manitoba just a few hours northeast of Minot, North Dakota. The 12 acre pit is open every summer for rock hounds and fossil hunters. It's only a 4.5 hr drive east of me and I try to go one day a year, with or without the kids.
Are there any other rock hounds out there? Do you have a favourite hobby you need to get out of your system once in awhile? Do you collect something which gives you a reason to travel?

Now don't laugh, but I'm going to be giving away the 2 rocks you see here. The one of the left is a 1" piece of petrified wood and the one of the right is the little agate I was holding up to the light in the last 2 photos. They're small because I didn't want the package to weight too much. As it is, can you imagine the postal employees when they read the contents as 'rocks'. But I wanted to give you something as a visual reminder of God's unchanging love. And because I love history, I'll be including a copy of Janet Dean's debut book Courting Miss Adelaide. So please, leave your e-mail address if you’d like to be in the drawing. I’ll be drawing names at midnight eastern time October 22nd. Remember to include spaces or brackets around the "@" sign so Net spiders, etc, can't phish your address.
Posted by Anita Mae Draper at October 20, 2009