I'm going to make a slight detour in getting to the writing oriented theme this week. First, I'm going to explore a concept that captured my imagination earlier this year: The Paradox of One.

Five years ago a young, energetic teacher arrived at my children's interdenominational, multi-cultural (that's politically correct for "poor") school with a vision for developing the best music program in the city. He started with a handful of band students and a choir made up of willing girls and boys ordered into the program by the principal. Four short years later we took sixty-eight of the school's seventy-five high school students to Anaheim, California to the Heritage Music Festival where our band and choir students took first and second place respectively and garnered Gold festival standings. 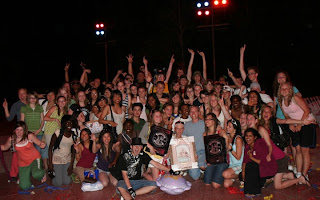 In April of this year we again attended a Heritage Festival, this time in Seattle. The school's high school science teacher fulfilled the role as tour chaplain. Every morning at devotions, he read a scripture verse that explored a scriptural paradox. A paradox is an apparent contradiction. Such as, die to live, first is last, and many are one. You ask, how can many be one if they are completely different things?

But if you think about it, life is filled with this simple mathematical paradox. In our Christian faith, the most obvious example is the Trinity. One God. Three persons. Each wholly God and yet indivisible. One. Another is Paul's reference to the Christian community of believers as many parts, one body in Corinthians 12. In John's gospel, chapter 17, Jesus ties the two previous concepts together, exhorting believers to be one, like "we are one."
Christians share in the universal (or widespread, if you prefer to be postmodern about it) belief that in marriage, two people become one.


We don't have to look far to see how many can become one. Examples abound.


And for our students at the Heritage Festival, they were a living example. As one of the parents crazy enough to be a repeat chaperon, I've seen these awesome individuals, these kids who come from every economic background with parents who have come from every corner of the earth, become one voice or one melody as musicians. 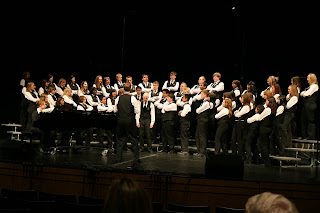 At the end of the music tour we held a poetry contest. The objective was to kill several hours of a ten hour bus ride and to (hopefully) spark some creativity to share with the ten or so students left behind. Among the silly, profane, and profound, two students submitted the following Haiku that beautifully illustrates the paradox of one:
Singing softly now

We play our hearts, all as one
Lifting praise to God.
(by Nicola D. and Sophia B.)
Now we leave my meandering thoughts to come back to the topic at hand.


How is "one" a paradox in the crazy world of fiction literature?
Before I decided I would turn my incessant need to write stories into a potential career, when I saw an author's name on a book I believed the myth that writers were solitary creatures who toiled alone to produce their manuscripts. And once the writer had reached "The End" publishers and the world at large waited with welcoming arms to receive that worthy masterpiece.

And then I submitted my first complete manuscript and received a prompt rejection letter, a single paragraph proceeded by a salutation, "Dear ____________," the whole lot, company logo included, photocopied at a squiffy angle on the page.
What I've learned in the years since is that the "one," the author's name, is truly made up of many, many individuals who work with the author to bring her story to the masses.
The first "many" an unpublished writer should meet are other writers. In this crazy, fiercely competitive business, writers band together to offer each other support, teach each other craft, critique each other's work, and promote other writers. Yup. That's a paradox in itself. Writer's supporting their competition. Crazy, huh?
So, why do they do it? Why do writers help their competition? My theory is that because the industry is so difficult, because writing is, at its core so solitary, and that because good writers need readers to become better writers, writers need other writers not only to survive, but to thrive.
Of course, there are also the agents, editors, and marketing professionals who take a writer's words and polish and package them so that readers can enjoy them.

In this age of "me" and "I" it is an amazing thing to be part of a business that doesn't reorganize every five years on the latest workplace organization trends. We don't go flat only to become cellular only to come full circle into business unit silos. Through the miracle of the internet, we writers find each other and work together on a common dream so that some of us (it is statistically impossible that all of us) might succeed.
The next time you pull a book off the shelf by your favorite author, turn to the acknowledgment page. My bet is you'll find named some of the "many" behind the "one" name on the book cover.
It's a paradox. And yet in the best paradoxes we find not only a contradiction, but a gem of a mysterious truth.
Please, share with me your favorite paradox.

Make sure you leave me your email address in a format spammers won't get (name [at] domain [dot] com)to be in the drawing to win a $10 Amazon gift card.
Posted by Wenda Dottridge at October 16, 2009