I was raised in a very contemporary, non-denominational sort of church that was birthed out of the Jesus movement of the early 1970’s. We never looked to traditions or saints or ancient writings to enrich our faith. We looked to the Bible as a final authority, and the Holy Spirit as a source of fresh inspiration. Anything else was “dead religion,” and “dead religion” was bad. So, it wasn’t until much later in life that I began truly discovering and appreciating the history of our faith and the great believers who have gone before us.

My experience with the ancients began when I attended a seminar in 1999 on the subject of Spirit-Led Teaching. Although the speaker came from a similar background to mine, he had discovered much about tapping into God through studying ancient Catholic traditions. Something about the seminar began to open up whole new realms of awareness for me.

That fall, although I already held a Master’s degree in writing from a Christian university, I decided to take additional MFA classes in poetry at my local secular state school. It was there that God continued to show me a whole new side of himself. Several of my classes were taught by a born-again believer who had converted to the Eastern Orthodox faith. And if that were not enough to make God’s point clear, I found myself surrounded by devout Catholics students. 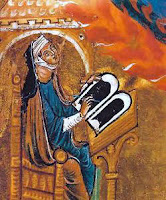 I brought my poems into class expecting them to be torn to shreds due to their spiritual content. Instead, the other students pointed me towards the poetry of the medieval mystics such as St. Francis of Assisi, St. Thomas Aquinas, and St. Catherine of Sienna as examples of the finest writing about intimacy with Christ. A sweet gray-haired lady in the class brought me a CD of music written by one of the poets named Hildegard von Bingen.

I still wasn’t quite sure how a felt about nuns who worshipped Mary and used gem stones for medicinal purposes, but I appreciated Hildegard’s poetry, so I decided to give her music a try. As I listened to the first song, I sensed something real, something important floating toward me between the lyrical tones.

I prayed this simple prayer. “God, if Hildegard von Bingen discovered something about you that I need to know, then show me.” Almost instantly, I felt myself transported to a different sphere. Hildegard did know something. She understood that the spiritual world was alive and active all around her, that the kingdom of God resided within her, and she knew how to tap into that place. She knew how to meet with God and truly see and feel him. The medievals called this an “ecstatic” experience.

Here are just some of the words I wrote about the ecstatic experience I had as I listened to that music.


“I feel myself float, move past, and dive deep into that clear pool. Sun shimmers in the water, as if I swim through sparkling, translucent gems. I am enraptured by the cool, silken liquid. I feel nothing but the swirling cocoon molding to my bare skin. I glide effortlessly, set free from earthly weights, from gravity, from sound. My ears are filled with the sweet, gentle swish that washes away memory and desire. I am now. My hair streams behind me, dancing in ribbons of praise…”

That was over ten years ago. However, recently, I’ve been noticing more and more Christian books on the subject of rediscovering our ancient roots. It seems I was not the only person God was speaking to on this issue. In his book, Jesus Brand Spirituality, Ken Wilson explains why this is happening. 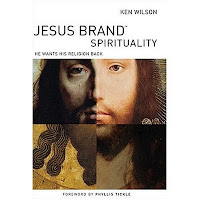 "The recent interest in these practices isn’t accidental. It’s not simply that we’re tired of contemporary prayer and are now trying older methods. Or that 'ancient is the new future.' It’s that recent shifts in our worldview correspond to an earlier, premodern worldview in which God’s nearness made sense."

He explains that the ancients believed they lived in a spiritual world. They approached the universe with wonder and awe. They didn’t presume to know all the answers. However, the modern world of the past 500 years or so assumed that everything worth knowing could be discovered through the five senses. Mankind desired to research, pull apart, and systematize the universe, including theology. The scientific method ruled supreme.

Today in our postmodern world, that same scientific method is returning us to wonder and awe and an awareness of factors we may never understand. Today scientists see “the physical world as being foamy and cloudy, popping in and out of existence, impossible to pin down exactly, impossible to predict precisely, mathematical, and almost mystical.” They now suspect that there are at least two more dimensions outside of our time/space four. We are a generation that grew up with Star Trek: time warps, wormholes, beam me up Scotty.

Like the ancients, we are better capable of understanding the spiritual universe than the generations in between. Here is an excellent example that Wilson offers. We understand that through the portal of our computer, while we sit in our living room, we can simultaneously enter another dimension, another sphere, another place, called the internet. We can be “online.” And there we can even meet with people.

This is precisely how prayer works. Through the portal of prayer, we can enter spiritual realm, the kingdom of God within us. We can literally go to another place, and meet with God face to face. Prayer no longer needs to be a practice of “simply uttering (or thinking) words aimed at God.” Going to a different sphere makes perfect sense to us. In fact, I write these words at this very moment to my community of virtual friends, many of whom I’m closer with than the people living next door to me.

Somehow I have a feeling Hildegard Von Bingen understood this truth without aid of the internet example. And thus, the ancient and the postmodern worlds collide into something beautiful.

Have you felt drawn towards any ancient practices or the examples of ancient believers? What sort of church background did you come from and how did that affect your understanding of God? What do you think of all these crazy new scientific discoveries?
Posted by Dina Sleiman at March 15, 2010