by Susanne Dietze
One of my favorite saints, Thérèse of Lisieux, once said that if the saints in heaven came back to earth and read what had been written about them, they wouldn’t recognize themselves. I think St. Brendan would agree with her, as the legend surrounding his ministry has overshadowed his personal history. 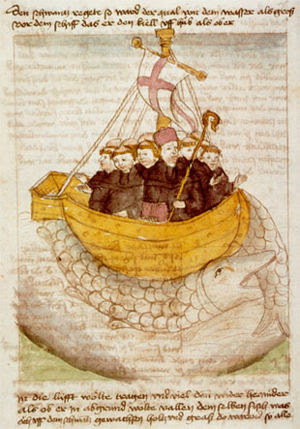 Image via Wikipedia
I first heard of Brendan as a newlywed. My husband had been called into ministry, and we prepared for a cross-country move for three years of seminary. We were young, but not naive enough to think that we could succeed without God's help. As two kids fresh out of college, we did not feel spiritually equipped for the life to which we’d been called.

At least we were financially set, or so we thought. But right after our honeymoon, we both became ill from a rare respiratory ailment. Neither of us could work for almost a month. Though we were blessed that our parents could help us with our expenses during that time, the cost of our medical treatments and other needs ate away the savings we’d intended to pay for our moving van and ultilities once we arrived.

As we stood on the verge of an adventure we still felt called to undertake, we were completely humbled. Through prayer, we held confidence in God’s plan for us, but we wondered how He expected us to manage the move, emotionally, physically and financially. Would He really provide for us?

We had no other choice but to trust Him.

One afternoon, the Christian radio station broadcast a song I’d never heard before. It was by rock band Iona, and (in a gleeful, carefully-planned splurge) we bought the CD. It turns out that the majority of the songs on this particular disk were inspired by the ministry of a Celtic saint named Brendan. The last song on the CD struck me:

I knew nothing about Brendan, but in Iona's interpretation, this guy was unsure what would happen when he climbed into his boat. Despite his fear, he believed there'd be a "path across the sea" if he was following the Lord. I needed the reminder that if God had called us to seminary, He’d get us there. And we’d never succeed without His provision, His knowledge, and His help every step of the way. 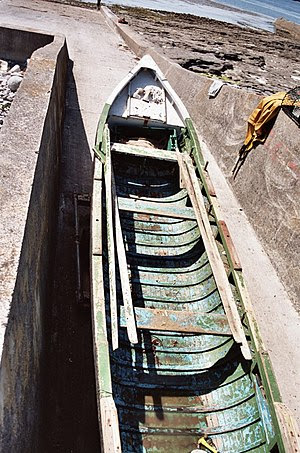 Image via Wikipedia
I know a bit more about Brendan now. Here are the basics: he was born around 484 in what is now County Kerry, Ireland, he became a priest, and he founded monasteries. In the course of his ministry, he discerned God's call to step into a currach – an open-air boat made of wood and animal hides – and set sail, preaching the Gospel beyond his native land.

Brendan obeyed, climbing into a currach more than once in the course of his ministry. His largest voyage lasted seven years and took him into unknown territory. He returned home and died peacefully after a long life of service to God, already revered for his legendary journeys.

Those facts say nothing of how he may have felt stepping into the boat. And that unknown land I mentioned? Well, it’s said that Brendan crossed the Atlantic Ocean and visited North America one thousand years before Christopher Columbus.

Amazing stuff, isn’t it? Many folks have dismissed the account of his great journey as religious allegory (and yes, just as the above icon shows, there are tales aplenty which describe Brendan celebrating Eucharist atop whales, or engaging in adventures which sound like other immram, or Irish voyage stories.) And the idea is ridiculous anyway: he couldn’t really have sailed across the Atlantic in a little leather boat, right?

In 1978, a writer and historian named Tim Severin proved the possibility of Brendan’s voyage when he successfully sailed a currach from Ireland to Newfoundland.

To me, however, Brendan's visit to North America isn't the point of his story. What humbled me to my core is that Brendan, a guy just like you and me, heard a call from God, and despite the huge and scary element of the unknown involved in that call, he obeyed.

Before his great voyage, Brendan offered a prayer, and it’s one that I love:

Shall I abandon, O King of mysteries, the soft comforts of home?
Shall I turn my back on my native land, and turn my face towards the sea?

Shall I put myself wholly at your mercy,
without silver, without a horse,
without fame, without honor?
Shall I throw myself wholly upon You,
without sword and shield, without food and drink,
without a bed to lie on?
Shall I say farewell to my beautiful land, placing myself under Your yoke?

Shall I pour out my heart to You, confessing my manifold sins and begging forgiveness,
tears streaming down my cheeks?
Shall I leave the prints of my knees on the sandy beach,
a record of my final prayer in my native land?

Shall I then suffer every kind of wound that the sea can inflict?
Shall I take my tiny boat across the wide sparkling ocean?
O King of the Glorious Heaven, shall I go of my own choice upon the sea?

O Christ, will You help me on the wild waves?

I have struggled with placing myself under God’s yoke, wondering if Christ is with me in the unknown. I have begged for His help as I sailed wild waves, and I've sat awake and afraid on nights far darker than those I spent fretting about God’s provision before and during seminary. (I should take this opportunity to praise Him, because of course, He did provide for us in every way, even financially. Someone whom I still have not met sent us a check to cover our rent for one month while we were sick. Our next-door neighbors suddenly moved away, leaving us the food in their freezer, and the sale of my husband's truck exactly covered the cost of a moving van.)

Wherever I may go Your love surrounds me,
For You have been before beyond these shores.*

Romans 8:39 tells us, “neither height nor depth, nor anything else in creation, will be able to separate us from the love of God that is in Christ Jesus our Lord.”

There is no unknown place to Him; He has been everywhere we can possibly go. He created the air beneath the wings our airplane, the watery depths below our ship, the crevice of every cave and the innermost parts of our bodies, and He is and has been and will be wherever we go or need Him. When we face the unknown, we would do well to follow Brendan’s example and throw ourselves wholly upon the God who made us and loves us. Like Brendan, as we leave the “prints of (our) knees on the sandy beach” before we shove off from shore, may we trust that God is with us in the boat, and trust that He waits at our destination, too.

Have you ever been asked by God to get into a boat, and you didn’t know where it would sail? How did it work out? I’d love to hear any testimonies of God’s faithfulness.

*"Beyond These Shores," music and lyrics by Iona, 1993, copyright SGO Music.