Did Avatar Leave You Feeling Blue?


My family and finally I saw Avatar. It cost $33 for my son, husband and I to attend the 3-D version, so no snacks for us. But so much has been said about the mastery and technical awesomeness of the film, I didn't want to miss the chance to see it on the big screen, awkward glasses and all. 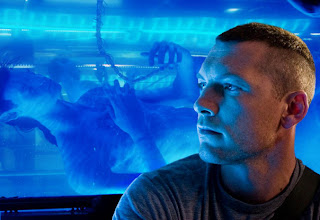 In a nutshell, Avatar is the story of the Na'vi. They are uber-tall, blue, almost cat-like people living on the planet Pandora. They are in touch with nature. They live in harmony. And the sky scraper tree they call home just happens to be sitting smack dab on top of a rich strain of Unobtanium. Not only can the mineral help the Earth (which has naturally depleted all its resources) solve its energy crisis, but it's worth about a bazillion dollars an ounce. You know what that means... if they won't give it to us, we'll take it by force. Human scientists and ex-Marines are able to interact with the Na'vi via the use of avatars: biologically engineered bodies that can be controlled when the user is in a pod-like machine.

You can probably figure out where the story goes. And I'm sure you've seen some of these characters before. (Colonel Quaritch is such a clichéd, over-the-top, nothing-good-about-him bad guy, he comes across as funny when he's not meant to be). What made Avatar spectacular wasn't the story as much as the delivery. The 3D effects are pretty awesome. James Cameron (who wrote and directed the movie) has every right to be proud of his accomplishment. He created a world that captivated people and drew them in.

In fact, it might have drawn some people a little too far in...

On January 11th, CNN.com ran an article reporting that, after seeing Avatar, some fans were feeling pretty blue. Over at a fan forum site there have been over 1000 posts on the Ways to cope with the depression of the dream of Pandora being intangible forum. Dr. Stephan Quentzel, psychiatrist and Medical Director for the Louis Armstrong Center for Music and Medicine at Beth Israel Medical Center in New York, had this to say:


"Virtual life is not real life and it never will be, but this is the pinnacle of what we can build in a virtual presentation so far. It has taken the best of our technology to create this virtual world and real life will never be as utopian as it seems onscreen. It makes real life seem more imperfect." This article made me stop and think about people being so taken by the virtual world they'd be depressed that they couldn't be part of it. For me, while Pandora was beautiful and full of bizarre, intriguing things, it always felt like I was watching extremely high quality computer animation. That doesn't take anything away from the movie, I just never felt like I was taken to another physical world.
A lot has been said about whether this movie demonizes the military or is something to be laid on the altar of pantheism. I don't think either is true. The biggest good guy in the whole movie is ex-military. And yes, there's a "let's live in harmony with nature" message (which James Cameron admits he wanted to get across to people.) I don't think there's anything wrong with that. As long as we don't start worshipping nature, it's a good thing to take care of the world we live in.

One thing that might make my fellow Americans squirm is the outing of one of our oldest, and darkest, traditions: Manifest Destiny. That belief that if you have what we want, and you won't give it to us, it's okay for us to take it. Our country was built on this principal (just ask the Native American Indians). It's motivated by greed and not a pretty thing, but it's something we need to be aware of. While we don't call it that anymore, we still do it. Only now, individuals do it to each other. And thinking about that does make me sad.

All photos credited to James Cameron
Posted by Jennifer AlLee at March 27, 2010