Someone once famously defined madness as doing the same thing over and over and expecting different results. By that definition I’ve had more than my share of lunacy. One of my most entrenched character flaws is stubbornness. I think it could take the emotional equivalent of a nuclear bomb to shake that one out. Hmm, I wonder why?
Truly stubbornness stands me in good stead for some ventures. Take, oh, I don’t know. Maybe writing? Seriously, in this day and age you have to possess the tenacity of a mixed breed pit bull/mule in order to have a hope of being published. So in that sense, continuing to plug along is the right thing to do. Even it requires a course adjustment or two or ten to get things right. 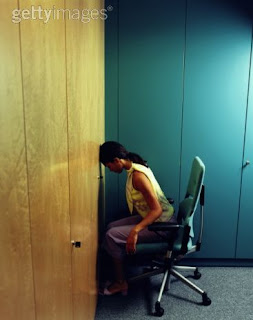 At some point there comes a moment when banging our heads against a closed door morphs from begging entry to a mere symptom of concussion. The trick is to discern when, because it varies for every situation.
I’m learning that God may have good reason for closing a door that I desperately want to go through. At least I’m trying to. It ain’t so easy when I’m in the middle of a long hallway with a closed door in front of me, and the only other option seems to be going backwards.
You see my husband and I have been appointed missionaries for the last six years. Before that, we were associates in missions (kind of like junior varsity.) We met in Bible School and got married with the understanding that missions was our passion and that we would spend our lives together overseas.
Things progressed according to plan. We went on our aim trip and it was successful and fulfilling and challenging, and all the other wonderful things we thought it would be. We received our appointment and ordination. Had a couple kids, and everything still seemed on track. And then God began the switch up. He changed the field of our calling. Yikes!
Unexpected, but hey we can roll with the punches. We presented the change of field request to our missions board.
And they told us no.
Aack! We prayed. We sought counsel. We took a short trip to the nation in question to see what God would tell us. In the end we felt that God would honor obedience. And so we went ahead with our original plans. IN our heart of hearts we thought that perhaps we would finish a term or two and then try again for a field change. Our ultimate goal was deferred for a time, but not in any way crushed. We’d still be doing what we loved most.
And then we couldn’t raise our budget. (Even though the nation of our appointment is in Africa it’s one of the most expensive in the world.) We did it all by the book. Our numbers were average, but not great. We tried for unusual solutions. It didn’t work. We are in no way perfect, we made our share of mistakes, but nothing we tried seemed to work. And all the while we kept banging our heads against the proverbial door.
A couple of months ago everything seemed to fall apart all at once. A sickening roller coast ride ensued with us strapped into a rickety little car, unable to get off no matter how sick we were to our stomachs. We had become trapped in a political wrangle. And as we swung between hope and despair we finally had to confront the fear that maybe, just maybe, we weren’t going to be missionaries after all.
We made one last ditch effort to try to change fields. It would be cheaper to operate there after all. It culminated with a painful board meeting where we were given 2 choices, both of which were non-choices. Take our four-year-old and six-year-old to Africa without sufficient funds to live on, or resign.
Hurt and frustrated don’t even begin to describe the emotions that roiled around within me. I told Joel that it was like suffering a miscarriage. All our hopes, and plans and dreams were dead. We were grieving… and angry.
And not just with men. I’ve been totally and completely mad at God. How could he abandon us like that? How could he let agendas and politicking overcome what he led us to do? I wonder why we didn’t just quit years ago when the board told us no. Surely that would have been easier for all concerned?
So for the past month I’ve been trying to reconcile all this and come to terms with what feels like the end of all things. I still don’t have all the answers. I don’t get it at all in fact, but I’m trying to cling to the idea that my lack of understanding doesn’t change who God is. This hasn’t happened because we are being punished, but because he has something better in store for us.
I know it’s true because God has taken the time to meet me even in the midst of my most despairing, angry moments. When I wondered if he hated us, and railed at him for putting us through all this. He’s whispered love and healing to my heart. He’s given me the gift of his presence and spoken to me through sermons. 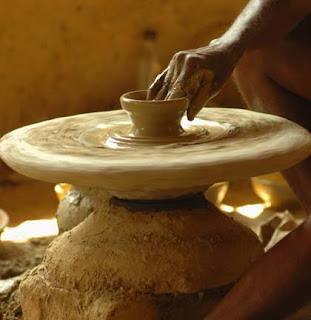 I confided in my husband that it felt as if we’d lost so much more than a job, or even a calling.
That I’d defined myself as a missionary, and so it was like that piece of myself had been stolen. A little later when I was alone and crying again, telling God the same oh, so profound revelation, he nudged my heart and said simply. “Why not give me a chance to define you?”
The grieving process isn’t over. Some days are better than others. I think it will still take awhile for full healing to occur. There may always be some pain. I'm a work in progress. But I know that God has a plan. And that I’m better off with him, than by myself.
Oh, and I’m done banging my head against this particular door.
Have you ever been forced into a detour? Did it work out? What advice do you have when all the doors seem shut?
Posted by Lisa Karon Richardson at March 09, 2010