Barn Cats: Not a Perfect Society

by Anita Mae Draper and JJ Draper
My eleven year old son spent most of last summer observing our barn cats. He started this after reading Erin Hunter’s Warrior series. The books are about a mythical society of cats. JJ became so enthused with the books, he spent hours in the loft confirming what he read. And then he’d come running into the house excited because our cats conformed to the norm.

I asked JJ to write a small blurb about barn cats and this is what he came up with:

Cats live in a type of society which is very interesting to me. The mother cats take care of the kittens, catch food, and play with the kittens too. In their diet is mice, birds, gophers, voles, snakes, and water voles. The cats do play with each other lots. They are interesting because in the hay they make tunnels, and dens. Altogether they are really helpful because they catch pests.

I asked him if the male cats take care of the kittens. He once saw a male carry a mouse in his mouth over to a corner where some kittens were but he said he didn’t stick around to see if the male actually shared with the little ones. Usually, though, the male will carry his ‘prize’ off to a corner by himself and growl if anyone else goes near.

A couple years ago when we had dairy goats, I had a chance to watch the cats in action while doing the morning milking. My favorite times were when the cats would line up in a row and wait for the squirt of milk right from the source. Even though they seemed to know where the milk came from, they’d still jump when the milk ‘got’ them. It didn’t take long before they were pushing each other out of the way with mouths wide open. It sure was funny. The barn faced east with a big sliding door that we’d open wide in good weather and let the sun fill the barn. 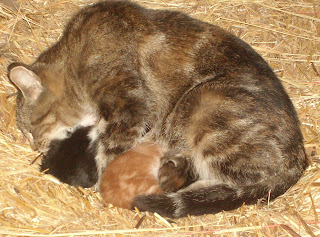 Of the seven barn cats we inherited when we took over the farm, a gray tabby became a favourite. We called her Hunter because we’d often see her trotting down the driveway with a field mouse or gopher in her mouth while the other cats sat around waiting for us to dish out their twice daily feed of prepared cat food. Hunter had a small litter of cats and would sit in the sun, kittens suckling, while I milked the goats. A patient mother, Hunter would lie in the sun and ignore the growing kittens as they played tag around and over her. She’d even slide her tail back and forth, teasing the kittens.

Hunter’s kittens grew into adults and had kittens of their own. One morning, Hunter’s daughter, kittens trailing behind her, joined us in the morning sun. But instead of stopping, Hunter’s daughter ran outside and disappeared around the corner. Her kittens followed but stopped at the door. Soon, they turned around and ran over to Hunter, their grandmother, and snuggled under her. As if it happened all the time, Hunter shifted so the kittens could suckle. She gave me this bored look before lolling her head back on the cement. I was amazed she would accept her ‘grandbabies’ without a murmur. Hunter was the best hunter, mother and grandmother. 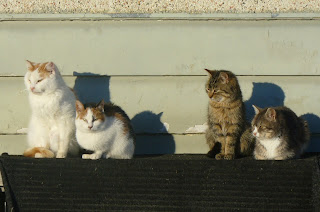 And like other cats, the male didn’t do anything but eat. Rarely did we see him hunt for itself, yet he always showed up at feeding time and usually tried to snitch ‘treasures’ from the females.

So barn cats are like the fabled amazons, only needing the males for procreation purposes. Why would God create a matriarchate society where one gender is over-worked and the other lies around licking himself all day? I really don’t know.

But I’m not worried about JJ seeing a society where the father lazes around all day while the mother does all the work because his own father does his full share around the house as far as laundry and running a household is concerned.

And that’s not how God operates, either. He is a loving Father who takes time to care for us. He protects us. He feeds us. And He patiently waits while we play at His feet.