I love books about animals. Tomasina. Black Beauty. Watership Down. And who can forget those three classics by E.B. White? Charlotte’s Web, Stuart Little, and The Trumpet of the Swan. I love them all. They steal my heart and fuel my imagination. And since this was animal week here at the Inkwell, I thought it would be the perfect opportunity to introduce you to one of my all time favorite animal books: Unspoken by Angela Hunt.

Glee Granger has spent the last eight years teaching Sema, a young gorilla, how to communicate through sign language. But Sema can do more than simple signs. She can communicate her thoughts and feelings. She can reason like a human.

One step away from her master’s degree, Glee is trying to use this unbelievable level of animal communication in her thesis. But now the zoo who gave Sema up eight years ago, wants her back. But they don’t just want to incorporate her into the zoo’s Gorilla Pavilion, they want to turn Sema into a performing act in an effort to raise publicity and funds for the zoo.

And though Sema is excited at the idea of meeting others like her, Glee is not. Glee doesn’t want to ever be separated from the young gorilla she loves like her own child. What if she can manipulate Sema into believing she isn’t happy with the other gorillas? What if she can convince Sema that she’s miserable in the zoo? Will she then be able to talk the zoo into giving Sema back to her? 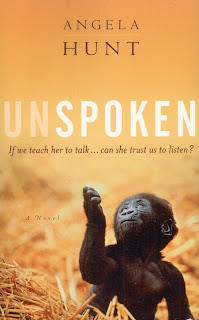 The relationship between Sema and Glee touched my heart and made me wish the book would never end. But it was the relationship Sema had with the other gorillas that brought me to tears more than once. It was also that relationship that brought a myriad of questions to my mind, not the least of which was the question of whether or not animals communicate with God. Yes, as in pray. Do they? Is it possible? Glee finds herself asking this question as well, and it’s her question and the answers she finds that will either lead her to Christ or drive her further away.

Unspoken touches on some interesting, thought-provoking points that you may—or may not—have thought about. And I guarantee that if you haven’t thought them before now, you’ll definitely have something to ponder after reading this incredible story.

Pure genius, Unspoken grabbed me, perhaps one of the most cynical of readers, in a way no book ever has—and I suspect no book ever will again. It remains a beloved favorite, one I’m sure I’ll read every few years.

So get ready to have your heart stolen in this unforgettable and fascinating tale. Angela Hunt skillfully ignites the imagination as she takes readers into the heart and psyche of little Sema, who isn’t just a gorilla on the pages of a book. She leaps off the pages, larger than life, and will have you suspending your disbelief as you fall truly in love with her. But be prepared. You’ll need a Kleenex or two for this book that is sure to live in your heart for a very long time.

Thanks for visiting today. Since it was animal week here at the inkwell, I've written on my personal blog about God's most magnificent creature. Of course, it's my opinion only, but I couldn't resist sharing it since I love telling stories. Visit http://suzieswritingplace.blogspot.com/ to read about my favorite animal.