by Gina Welborn
Last week as I was painting one of the bathrooms in my house, I learned that over seven million tons of plastic is spanning our oceans. A vortex--gyre--of marine litter. No joke. Apparently "the existance of plastic in the oceans is causing infertility." Considering my feet have dabbled in ocean waters (hmm, does the gulf of Mexico count?) twice since I got married almost seventeen years ago and since I have five children, it's obvious the plastic-infected waters have not sterilized my womb. Of course, I could merely be an anomaly.

Could be or could not be an anomaly, that is the question of which I'd need at least half a day to ponder.

Anyhoo, this Great Pacific Garbage Patch spans "the size of Texas." Texas!?! I've been to Texas. It's huge-er than huge and that's not just the hair on the women. (On a side note, I read the other day that you might be a redneck if your stock portfolio consists of two sheep and a goat.) Get this: Imagine Texas-size trash heap floating aimlessly amid all those adorable human-eating sea critters....

Well, I couldn't ignore this dreadful news so I googled for some pictures to show y'all.  Only I couldn't find any. Oh, I found YouTube videos, even one from a news segment from a national network morning show, but no actual pictures of the vortex so I'm limited to showing you this diagram. Dreadful isn't it?

My mind is swimming...I mean, spinning. But what's even more dreadful is the fact no one has pictures of this ginormous garbage. In this crazy day and electronic age when everyone but me has a mobile phone, surely someone with the time could mosey on out to that plastic-filled gyre and take a pic. I want a pic. While in labor with child #5, I suffered through six hours of the Anna Nicole burial trial. I freakin' deserve a pic! (No offense intended to anyone offened by the accidental use of the minor-f-word. Hubby spent three days in Disney World, leaving me alone with all of our five children, the dog who dislikes our nice Asian neighbors, and a cat who just won't run away. My nerves are rattled.)

Sadly, it's impossible to take a picture of this watery trash. Why? Experts say, "Since plastics break down to ever smaller polymers, concentrations of submerged particles are not visible from space, nor do they appear as a continuous debris field. Instead, the patch is defined as an area in which the mass of plastic debris in the upper water column is significantly higher than average."

Huh? You lost me at polymer. Is that a cousin to polyester? Machine washable or dry clean only?

So, in other less scientificky words, the reason for no pictures is because "[the garbage patch] is [a] huge pile of trash collectively, but trash so small individually that the patch doesn’t show up."

If I understand correctly it's like air: unseeable, untouchable, untasteable, made up of bajillions of oxygen atoms that are so utterly small that we can see them even though we can breathe them. Obviously since I need oxygen to survive and since I'm still breathing, then, ergo, air does exist. Ergo, the Garbage Patch of the Great Pacific and other oceans exists.

Can you hear me sighing?

Call me Doubting Gina if you wish, but for me to believe this votex of swirling semisynthetic organic amorphous solid exists, I want proof. I want a picture! I want evidence! I want thousands of people who believe the Garbage Patch exist to suffer torture, imprisonment, and even death in the name of their faith in the existence of this littery waterworld!!!!!

Oh dear. I just typed five exclamation points. Perhaps I'm being a tad dramatic. (See note above on hubby in Disney and me alone with children.) 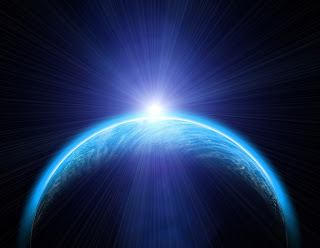 In the beginning God created the heavens and the earth. The earth was formless and empty, and darkness covered the deep waters. And the Spirit of God was hovering over the surface of the waters. Then God said, “Let there be light,” and there was light. And God saw that the light was good. Then he separated the light from the darkness. God called the light "day" and the darkness "night." And evening passed and morning came, marking the first day.

~Genesis 1:1-4
For many people, the problem with faith is the fact that faith doesn't prove God exists. You know, faith doesn't prove that "in the beginning," God created anything. The age-old faith issue. Does He or doesn't He. In my less-thn-forty-years-lifetime, I've learned that anyone who doesn't believe in God says those who do are narrow-minded. Well, to me, narrow-minded signals an unwillingness to consider other possibilities than what we believe.

I believe God exists and that He created the heavens, the earth, and all things in and around them in six literal 24-hour days. I'd go to my death for that belief. However, I'm also willing to honestly listen to someone explain to me why He doesn't and He didn't.

If you don't believe God exists or that He created what the Bible said He created...well, are you honestly willing to listen to someone explain why s/he believes God does and did create everything? Or are you going to be narrow-minded and insist you're right and no other truth can possibly exist?

Does God exist? Click here for some answers or here or take a trip to an Ohio museum.

“But without faith it is impossible to please Him, for he who comes to God must believe that He is, and that He is a rewarder of those who diligently seek Him.” ~Hebrews 11:6


Serious question of the Day: Ever learned anything cool/interesting/weird about creation or the existance of God? If so, what was it?

Non-serious question of the Day: What summer movie are you most looking forward to?
Posted by Unknown at April 19, 2010