Faith: Inside, Outside, Upside Down Christianity

by Dina Sleiman
In college I remember writing a poem that began with those words from the famous children's book. “Inside, outside, the whole world is upside down.” At the time I was attending a Christian university in the middle of the Bible belt South, and more often than not, what I saw was Christianity focused on outward issues. 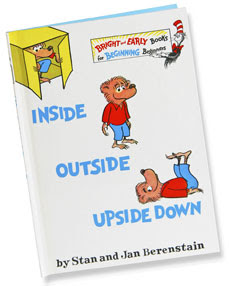 In a way it made sense, I guess. The Christian university would have had a hard time dictating that we all put others first, have loving, intimate relationships with Christ, hear his voice and walk according to the moment by moment leading of the Holy Spirit.

It was much easier to say you had to wear skirts everyday that came to the tops of your knees (that would be for the girls of course, and I must confess, I’m cool with guys not being allowed to wear skirts.) For the guys it was daily ties, short hair, and no earrings or beards. There were rules about swearing and alcohol and mandatory church attendance. We had a student honor code and dress code and dorm rules (did I mention if you were under 22 and unmarried you had to live in the dorms). The rules went on and on and they were all focused on who we were on the outside and the sort of impression we gave the community and the all important donors.

Now there’s not anything wrong with any of those rules in and of themselves, although few had anything to do with actual Biblical principles. I’m sure they were all designed to make us disciplined individuals and productive people, but rules were not going to lead us one iota closer to Christ. In fact, in a lot of cases, the severity of the rules caused people to rebel.

You may have a hard time believing this from your friendly neighborhood free-spirited, heavy-metal-loving Inky, but I was raised to have great respect for rules and authority, and I do (God wired me as an INFJ, but that's a self-help post for another day.) There were basically three responses to these excessive rules in college: students who didn’t mind them and followed them, students who ignored them and didn’t care, and students who were in constant angst, feeling that the rules were ridiculous and unfair, but who wanted to honor God by following the rules. In other words students who wanted to live from the inside out. In other words, me.

Okay, I feel like I’m caught in the college years, kind of like when I have nightmares about wandering through campus without my schedule or being forced to live in the dorms with three kids. Let’s fast forward to today. Today, I’m raising my own teenagers. And I’m not raising them in dormitories or with upside-down Christianity that focuses on outward standards. I’m raising them to live as I long to live, from the inside out.

Outside-in Christianity is a result of focusing on law. In the Old Testament God gave us law because Christ had not yet died on the cross for us. The Ten Commandments are great and all, but did you ever stop to consider that there weren’t just ten, there were hundreds? If you want to live by the law, shouldn’t you follow them all? The law brings death. Jesus brings life. We are now living under a new covenant. A covenant with principles, not law. A covenant where God calls us to a higher standard and demands our very hearts.

* Note: I wanted to insert a scripture here, but I pretty much needed to quote at least one gospel and most of Paul’s epistles. So, you know what, just re-read the whole New Testament. It certainly won’t hurt you.

Did you ever stop to consider that for several thousand years of mankind’s history there was no law? God judged by the heart for at least 2,500 years (let’s not get into a debate over the creation date here, cause I really don’t care). Only for the last 1500 or so years before Jesus did we have the law. The law was revealed so that man would understand how far we lived from God’s standard of holiness, and that we could never, ever, meet God’s expectations on our own. We needed a savior.


And he sent one, who died on the cross to redeem us from our sin and reconcile us to himself. He now wants us to live by basic principles. The law of love. The fruit of the spirit. We need to know his word, yes. Absolutely. Not because we need to reach our daily quota of Bible reading, but because God renews our mind through his word. Because God reveals his character in his word, and we need to know him as a best friend. We need to pray, yes. Because how can you be intimate with someone you don't communicate with? We need to be in church, yes. Because we need the fellowship of other believers to help us grow in our walk with the lord. Because we are one body in Christ, and we need to function together to reach out to a hurt and dying world. We need to live a holy life, yes. Because it pleases God and keeps Satan from getting entrance into our lives.
But living a holy life goes much further than keeping the Ten Commandments. (Read those epistles one more time please. Seriously, it will be good for you.) It involves dying to self, putting others first, extending love to the world around us. No more gossip or gluttony or lust. No more worry or condemnation, bitterness, despair, or low self-esteem. We are God’s children. His heirs. A royal priesthood. His ambassadors to the world.
But we’ll never get there on our own.


We’re going to fall short. God is well aware of that. That was his whole point in sending a savior. It’s almost as if the outside-in people act like Christ saved them once, and it’s been their job to save themselves everyday since.
This simply is not what the Bible says. Anywhere. God wants our hearts. A much higher standard than the law. He is not out to zap us. He has paid the price to secure our eternal destiny. He wants relationship with us that flows from the inside out. 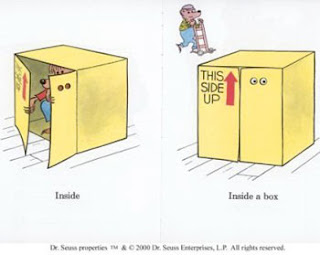