by Gina Welborn
Several months back on FHL's Finish the Book writing list, Vannetta asked for influencers for her first Amish romance. I sent her a note congratulating her, while adding "not me!"

Being the optimistic gal she is, Vannetta said, "Take a chance and read it."

Vannetta did the crazy thing and sent this Amish-book-disliker a copy.
My first thought, "Cute cover, but I still won't like it."
My second thought, "Egad! I'm gonna have to find something nice to say about it because I agreed to endorse it (despite Vannetta's e-arm-twisting)."
Well, I read page one. Hmm. Not bad. But I didn't have time to read the book at that moment; thus, I set it aside.
For our family vacation this year, we took the kids to Lancaster, PN, to visit our non-Amish friends, the Connells. (Actually, all are friends are non-Amish, or as my oldest son says "nomish." Not that we aren't open to having Amish friends.)  On day one of vacation, we went to Cherry Crest Farms...while, along the way, hubby sated his fascination with taking pictures of all the Amish folk.
"They're not animals in the zoo," I said in hopes he'd stop. He didn't.
Despite my uneasiness with his picture-taking, here's one that I'm glad he took: 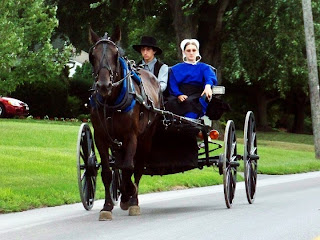 Yes, that Amish chicka is wearing transition lenses. And she doesn't look too happy with the dude driving the buggy. Hubby and I then had a debate about their "story."

Hubby finally said, "They're probably supposed to look somber all the time. An Amish thing."

No, I insisted the girl was vexed at the guy...and he's not too happy about it. Or her.

Next came several buggies with couples laughing or just looking like they're having a lovely time being together. One buggy had a chicka sitting in the doorlesss opening...and resting her leg--HER BARE LEG BECAUSE SHE'D HIKED UP HER SKIRT--on the front wheel beam.

"Did I just see that Amish chicka's naked leg?" I asked hubby. 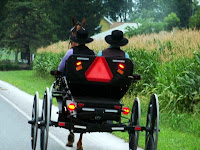 I wish he'd have taken a picture. Get this. The next day, we saw an Amish chicka (maybe late teens, early 20s) smoking a cigarette. Oh yes, we did!

I felt like God said, "Gina, you've had this narrowed-view of the Amish. Lemme shatter it." Ouch! I'm glad He did because I'd brought Vannetta's book with me to read on the way home from Lancaster.

Annie Weaver always planned to return home, but the 20-year old RN has lived in Philadelphia for three years now. As her time of rumschpringe is about to come to an abrupt end, bringing for Annie an overwhelming sense of loneliness. She returns home and finds herself face-to-face with a budding romance with an Amish farmer and Annie has several important choices to make.

Took me barely two hours to read the book. And I didn't skim a single page. That's a big deal right there because I freely admit I'm a skimmer. I figure it's an author's responsibility to include passages to sate my bad habit.

Only Vannetta didn't get the memo. (Neither did Laurie Alice Eakes in her Avalon historical, When the Snow Flies, but that's a review for another day.)

I liked A Simple Amish Christmas.
Didn't think I would back before Vannetta sent it to me.
Don't have to find something nice to say.

Because it was a sweet, satisfying romance.

One of the things Vannetta does well as an writer is layering in emotion of all her characters, not just her leads. That's key because in other Amish romances I've read, I never sensed much physical attraction (okay, emotion) between the hero and heroine. Annie and Samuel had a physical, emotional, and spiritual connection. Nice! That's what I want to read in an inspirational romance. In fact, I'd like to read a non-Amish romance by Vannetta to see how she handles the sexual tension without the uber-conservative Amish parameters.

I've been reading The Moral Premise by Dr. Stanley Williams. Great book for novelists and screenwriters. Has Vannetta read it? I don't know, but in her story is a line that sums up the moral premise of A Simple Amish Christmas.

"Love doesn't take time, dear. It takes giving of yourself."

Of course, the novel is a wonderful demonstration of living a life of grace.

I encourage you to read Vannetta's debut release and see how she applies the moral premise throughtout her stories and through her leads and several secondries.

A Simple Amish Christmas is an October 2010 Abingdon Press release. The more Abingdon novels I read, the more impressed I am with the variety (and quality) of novels they're putting out. To learn more about Abingdon, click HERE.