Medieval Myth-Busting
by Melanie Dickerson
What comes to mind when you think of the Middle Ages? Knights in armor rescuing beautiful damsels in distress—damsels with those pointy hats and long flowing dresses? Or maybe you think of monks with funny bowl-cut haircuts, chanting in their huge monasteries and developing new hybrid strains of string beans?

Me, I think of a colorful, romantic, exotic time when people were able to build massive cathedrals reaching into the heavens, with gorgeous stained glass windows that told stories from the Bible for all to see, when good men adhered to a code of chivalry and justice, and women had new horizons opening up to them—not to mention brave, noble heroes to take care of them. At least, I like to think so, although I know that isn’t completely realistic.

But there are other myths, too, about medieval times. From some of the medieval novels I’ve read and movies I’ve watched, I think people perceive the middle ages as a time of great oppression, when people had very little food, were worked half to death by cruel lords, went around dirty and diseased, and with their teeth falling out from poor nutrition and lack of toothbrushes.

Okay, so it’s true they probably couldn’t go to the store and buy an Oral B electronic toothbrush with dual pulsating heads and multi-level bristles, but not everybody’s teeth were falling out, either. They practiced better hygiene than you might imagine. In fact, books have been discovered from medieval times that instructed people in good manners, including how to clean their teeth. They even had a type of tooth powder made from herbs, and had their own toothbrushes, though different from ours.

Sometimes I think we assume the medieval people were more primitive than they actually were. Consider how civilized we deem the people of the first century, of Jesus’ time. They sailed on ships, they had courts of law, they read books, or scrolls, written in several languages. But I think we have a misconception that the people of the middle ages, of more than one thousand years later, were more barbaric and “behind” than of any time before or since. I won’t argue that they weren’t, (there’ll be someone much more qualified than me to do that) but I would like to put before you some facts.

Did medieval people take baths? In movies they go around with streaks of dirt on their faces. I would like to suggest that they often enjoyed a good bath. In fact, they loved baths so much, bathing was a social activity. The townspeople would actually meet at the town bath house, built by the Romans who invaded in the so-called “Dark Ages” and later abandoned England.

In the bath house the women bathed and gossiped. The bath house was the place to be on a Saturday night. Men bathed too, and no one’s quite sure if the men and women were always separate on these social occasions. Some paintings depict them bathing together, but personally, I just think that’s wishful thinking on the part of the (male) artist.

We also think of medieval people as serfs, cruelly worked by the “lord of the manor” and mistreated. This could be true, but who knows, really? We assume this is true, but very little written material or evidence has survived from the middle ages, especially from the point of view of the serfs. They worked the lord’s land, growing their own food in their own gardens, and sometimes their own pigs or sheep or goats in pens. The lord offered them protection, much as our own government does, and provided law and order. The lord was responsible for making sure justice was served in small as well as great matters, and an elaborate court system was in place. And in exchange, the people worked for their lord a certain number of days in the year. They also had to pay some small fees.

As Terry Jones pointed out in his documentary “Medieval Lives,” the serfs were “taxed” by working this certain number of days for the lord. If you compare this number of days with our modern tax rates, we in the modern world are actually taxed at a significantly higher rate than the medieval serfs were. Surprised? I was!

And now for my personal pet peeve. It seems every medieval novel I read involves an unbelievably sadistic wife beater. This is so common, it makes me wonder if people believe most medieval men were brutish and cruel to women. I personally think it’s likely there was less domestic violence going on then than there is now.

Consider that people didn’t live in their sound-proof houses, far from neighbors. They lived together, in villages, near each other and in wattle-and-daub houses with rather poor insulation. If a woman—or anyone, for that matter—screamed, it was called “raising the hue-and-cry.” Every person in England was required by law to come to the aid of anyone who screamed or called for help. If a man took a notion to hit his wife, he would have thought twice about it. If she screamed, he’d have the whole village down on his head, beating HIM up. Which makes for a pretty funny picture, now that I think about it.

So there you have it, my tongue-in-cheek medieval myth-busting for the day. Now I better go duck for cover in case someone disagrees with me!

~*~
Melanie Dickerson is a member of American Christian Fiction Writers (ACFW) and Romance Writers of America (RWA). Her novels have finaled seven times in RWA-sponsored contests, including winning the 2007 Fiction from the Heartland Contest over all categories. Melanie earned a bachelor’s degree in special education of the hearing impaired from The University of Alabama and has worked as a teacher and a missionary. She lives with her husband and two daughters in Huntsville, Alabama.

Visit her on the web at http://www.melaniedickerson.com/ or her joint blog with other Young Adult authors, http://www.novelteen.com/ or on facebook listed as Melanie Dickerson. 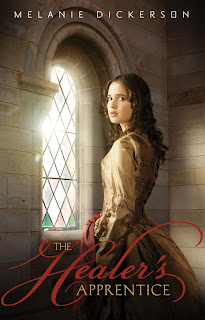 In this historical romance loosely based on the Sleeping Beauty fairy tale, a woodcutter's daughter becomes the town healer's apprentice. Rose's job is to care for the sick and injured in Hagenheim Castle. But she gets sick at the sight of blood and is more suited to making up stories than sewing up wounds. She is determined to overcome her weakness and prove herself a competent healer, or she faces marrying a disgusting old merchant her mother has picked out for her. Lord Hamlin, the future ruler of the region, is injured and Rose must overcome her squeamishness to save him. He is everything that is noble and good, but loving him is forbidden. He is already betrothed to a mysterious woman in hiding. With two noble-born brothers vying for her affections, Rose learns that the people of Hagenheim are not always who they seem.

Gina's 12-yr-old daughter was quoted last weekend as saying (while she sparkled with giddiness), "Mom, your friend's book is reeeeeally good. I'm glad you made me read it."﻿ She told all her friends at church to read it too.
Posted by Unknown at September 28, 2010