Holding History in Your Hands

by Anita Mae Draper
This is my first post under our new theme days. I picked Historical because I'm a history nut. It also explains why I write Historical Romance. Actually, I'm in the final chapters of my inspirational western, Emma's Outlaw and I'm very pressed for time and was hoping you'd forgive me for re-posting something I used on another blog awhile back. (And if by chance, you were one of the very few individuals who read this post, I've changed the questions at the end just for you.)

I’d like to show you some of the items I keep on my desk for inspiration while I’m writing. These items are specifically for my current historical, Emma’s Outlaw. When I hold them in my hands and let my fingers slide over them, I feel like I’m holding a piece of history. Well, I guess I actually am!

To start with, here are a couple U.S. Indian Head cents minted in 1897 and 1883 respectively. Emma’s Outlaw is set in 1879 Wyoming Territory so these pennies weren’t even around when Emma (the heroine) was kidnapped. Since they were minted from 1859 through 1909 though, Emma and Dan (the hero) would have had access to these coins. 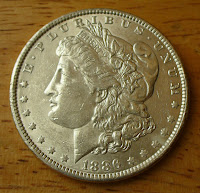 Another item I keep nearby is this 1886 Morgan dollar. However, I don’t touch the face of this coin. Made of 80% silver, any natural oils on my hands would leave fingerprints that turn black over the years. I handle it by the rim when I want to hold it for inspiration. (Usually, I just look at it and sigh.) U.S. Morgan dollars were struck from 1878 through 1904 and then again in 1921. Weighing 24gms, this hefty silver dollar is supposedly the kind Buffalo Bill shot a hole clean through after a toss up. 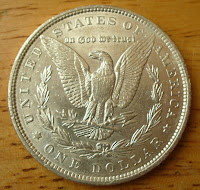 Other famous people who were known to carry the silver dollars were Billy the Kid, Jesse James and even Geronimo. People of the Old West preferred the silver coins to paper money which made the Morgans the main form of currency in the latter part of the 19th century, second only to gold. Somewhere in my research I’d even read where old timers used to keep a silver dollar in their canteen to ensure water purity.
Prior to the Morgan’s release, the most common form of payment for a drink was an unspecified pinch of gold by the bartender. Silver dollars brought equity to the table which was appreciated by everyone from the locals buying dry goods to travelers and even gamblers.
In the late 1800’s, a silver dollar would buy 50 pounds of flour, two pounds of sugar, five pounds of butter, 60 pounds of potatoes, 10 quarts of milk or a pair of moccasins. It would also buy a bottle of bourbon or rye whiskey. Of course, you could buy a glass of cheap stuff for a nickel but if the bottle came from a peddler’s wagon, it might contain a dash of pepper, Tabasco, tobacco juice, or even rattlesnake heads to improve the bite.
A complete meal of roast beef or pork, potatoes, 2 veggies, bread, butter, tea, coffee or milk and a piece of pie cost a dime. However, travelers stopping at stage stations had to pay from four bits to a dollar even if the meal was horrible.
A bit is one of those words unique to the western frontier. It comes from the Spanish milled coin real (re-al) which was also called ‘pieces of eight’. Unlike the dollar which can be broken into 4 equal ‘quarters’, the real was broken into 8 bits. So the quarter became known on the frontier by it’s nickname ‘two bits’ and 2 quarters ‘four bits’ etc.
While growing up, I remember my step-dad saying, ‘I wouldn’t give you two bits for it.’ It was one of those phrases I accepted as fact without knowing the origin. 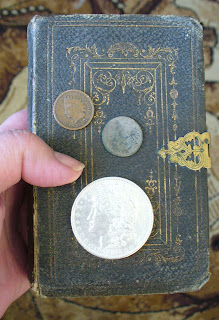 The last item I like to pick up and feel while immersing myself in Emma’s story is an antique 3”x5” Bible. It was quite worn when I bought it at Value Village for just a couple dollars, but the 1860 publishing date gives me a good feeling of touching history.
I mean, how many people have opened this little book looking for comfort and answers? How many tears have fallen on its pages?
This is the type of Bible I envision Emma to have – well, if she’d been allowed to grab a book before they kidnapped her, anyway. 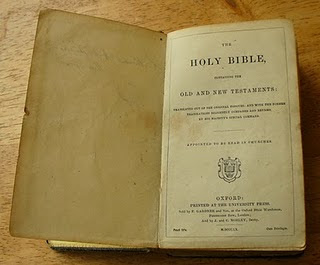 Are you an coin, antique or vintage collector?
Do you just look at your treasures, or do you pick them up and wonder who owned them before you did?
Have you ever researched a historical item and discovered a fascinating story?
Care to share? We'd love to hear it.
Posted by Anita Mae Draper at September 14, 2010