Readers and writers of romance are always searching for that next great love story. But what about real life?

Today I'd like to talk about love stories. Specifically my own, as well as one seemingly magical love story that captured my heart and imagination thirty years ago.

I was just a couple of years out of high school, and working at an electronics plant that played a Canadian radio station all day long. It was there that I first heard the rumors that Prince Charles may finally be getting married. My girlish and romantic heart soared at the very thought of some lucky girl walking down the aisle to say I Do to her prince.

Later, I watched as the prince introduced his shy fiancé to the world on television. As Diana showed her beautiful sapphire ring to the cameras, it felt like I witnessed the beginnings of a fairy tale.

Like millions of others, I became caught up in the anticipation of the Royal Wedding. It also seemed in some ways, that my life was paralleling that of the fairy tale princess. 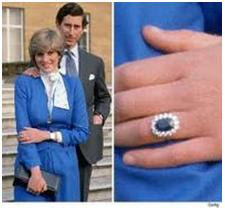 Obviously, I wasn’t part of the British aristocracy, and the man I was planning to marry wasn’t a prince; at least not by blood. In my eyes, though, he was indeed a prince. And while the cameras were busy capturing shots of Diana wearing her sapphire and diamond engagement ring, I was picking out my ruby and diamond engagement ring. While Diana was seeking a designer for her wedding gown, I was day-dreaming about what mine would look like.

Even my dentist got into the act. Looking back, it sounds so silly, but as I sat in the dentist chair with the silly blue drool bib fastened around my neck and his shiny, sharp instruments poking my mouth, Dr. Higgins would study my face intently, and say in a low dramatic voice, “Shades of Di.” Now I, in no way thought then, nor do I think now, that I looked anything like the beautiful princess-to-be. The only similarities I could even point to were my hair color, age, and nose. And though I may not have resembled Diana, on some level I took delight in the comparison. 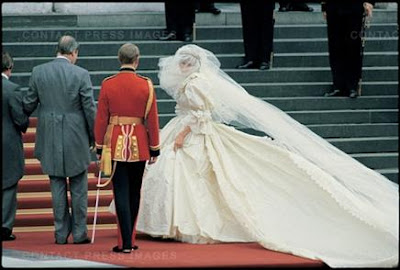 Diana’s big day came about four months before mine. And just like 750 million other people, I tuned in to watch what appeared to be the fairy tale princess’s dreams come true. It should come as no surprise that when I walked down the aisle a few months later, I reveled in the fact that the train on my ivory wedding dress flowed behind me in waves.

Just over a year later, four months after Prince William was born, my precious son was also born. And that was where the parallels stopped.

While Diana was featured on the cover of magazines every week, and appeared to be living the fairy tale life, my marriage was going through the typical ups and downs. One of my dearest friends, who shall remain nameless (DL, you know who you are!), bemoaned the fact that Diana was on the cover of every subscription that came to her mailbox, and on every magazine in the grocery store. I, on the other hand, never confessed to my friend that I enjoyed seeing Diana’s pictures and secretly read every article on her that I could.

Late one night, my husband, son and I were on our way home from seeing the second Jurassic Park movie at the local drive-in when the terrible news of Diana’s car crash came over the radio. I was devastated, heartsick, and prayerfully hopeful that she would survive. Of course, you all know the rest of the story. The beautiful princess, whose fairy tale wedding ended in divorce, would never get her happy ending. Not in the earthly sense of the word, anyway.

I’m no longer a Royal Watcher. I haven’t been since the day I watched Diana’s heartbroken sons accompany her casket to the church. Though she didn’t have her fairy tale ending, I sincerely hope her son finds his Happily Ever After with his bride-to-be.

Life is not perfect. No marriage or romance is ever perfect. It takes a lot of hard work, a lot of prayer, and a lot of trust in God. This year, my husband and I are fortunate enough to celebrate our 30th anniversary.

Do you plan to watch the royal wedding? Do you have your own love story you’d like to share with us today?