We at Inkwell Inspirations are honored that inspirational romance author Mary Connealy has allowed us an exclusive look at her exciting breakthrough into paranormal historical romance, LASSO THE MOON.

Her newest novel sure has everyone at the Inkwell buzzing. Gina says, "The book spellbound me from from first line and kept me entranced through the litterly unexpected epilogue." We're quite certain Mary's latest plot will inspire lots of questions, and she's agreed to stop in throughout the day. Be sure to leave your comments and questions, because we'll be giving away one of her books. 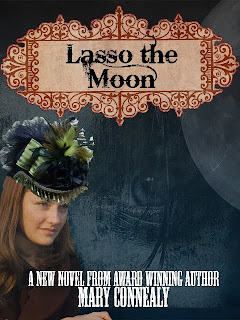 Constance McKinney is a compassionate doctor and skilled surgeon. But since town folk would rather travel forty miles by buggy than trust “that pretty, little woman doctor,” no one will ever find out. The only thing keeping her in town is her romance with the dashing new minister. But when that relationship sours, Constance jumps at an opportunity to practice in an area that truly needs her—Silver Knife, a dangerous mining camp miles from civilization.

Reclusive rancher Les Masterson is opposed to the mine and all the trappings of civilization that come with it. He prefers living off the land and spending time with his cattle instead of with people.
When Les is attacked and left for dead, Constance is called on to care for him. But while treating the fever and delirium caused by an infected bullet wound, she learns there’s more to this rugged loner than meets the eye. Les was once an attorney with a lucrative law practice in New York City.

What dark secret could have driven him away from the life he knew? And who is trying to kill him?


Les is attracted to the beautiful doctor, and longs for the kind of love and grace she talks about as she tends his wounds. Can there really be grace for someone like him? He knows attraction isn't enough to sustain a relationship with Constance. Not when he's keeping the darkest of all secrets.
Knowing the vigilantes who attacked him could return any day with their guns and deadly silver bullets, Les tries to push Constance away.

Determined to show him she can love him in spite of whatever he's hiding, Constance refuses to go.

Les is torn between running away to spare her from discovering the beast inside him, and testing her faith when the moon grows full.

I haven’t read much in the realm of paranormal fiction, and I wasn’t sure what to expect. But Mary’s timeless tale about the transforming power of redemption and its ability to reach all — regardless of where their past paths have taken them — really touched my heart.

What will happen after the next full moon? You’ll to have to read the book to find out!

Be sure to leave a comment along with your email address to be considered for the book give-away. 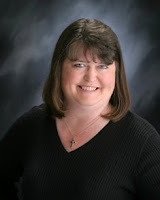 Mary Connealy writes romantic comedy with cowboys. She is the author of the Lassoed in Texas series, Petticoat Ranch, the Christy Award nominated Calico Canyon and Gingham Mountain. The Montana Marriages series, Carol Award Finalist Montana Rose, The Husband Tree and Wildflower Bride. A stand alone romantic comedy with cowboys, Cowboy Christmas which won the 2010 Carol Award for Long Historical Romance. A new series with ties to both of the old ones, Doctor in Petticoats, Wrangler in Petticoats and Sharpshooter in Petticoats.
Posted by Barbara Early at April 01, 2011