When All My Dreams Come True 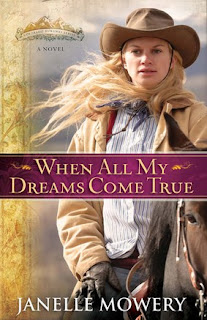 When all My Dreams Come True (Colorado Runaway Series Book 1) by Janelle Mowery,  Harvest House Publishers, Feb 2011
﻿
This book packs a wallop between its pages. The story is set among the mountains of 1872 Colorado Territory. Lots of space with plenty of rocks and trees to offer rustlers something to hide behind.
The story starts in the middle of an action scene and there’s plenty more between the pages on account of all the bank robbers and rustlers. Suspense and suspicion are maintained so you don’t really know who the bad guys are or how they’re involved until the end.
I like that the heroine, Bobbie McIntyre, wore trousers in her day-to-day work as a wrangler. And that she could shoot better than most men. It didn’t take long for me to see the kind of woman Bobbie was and although so many things changed over the course of the book, she stayed true to her character.
Jace Kincaid is a very likable hero – even when he faltered and I wanted to swat him on the side of his head. But his actions fit his character profile and I knew why he did what he did even if I didn’t agree with his reasoning. His action certainly upped the tension between the characters and increased the suspense.
The roller coaster romance takes us on a ride where our emotions heat up and cool down only to ride higher, faster, and longer as we reach the crest, then plummet in despair wondering if Bobbie and Jace will ever get together on the same track.
And through the story, the Gospel is unraveled to Bobbie who doesn’t realize she’s searching for a heavenly as well as physical home.
This book will appeal to anyone who likes stories about tomboys, Salvation, and the Wild West. 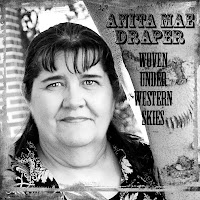 Anita Mae Draper is retired from the Canadian Armed Forces and lives on the prairie of southeast Saskatchewan, Canada with her hubby of 30 plus years and 2 of their 4 kids. In 2005, Anita Mae decided to return to writing and make it a priority in her life. She writes old west stories set on the prairies of Saskatchewan, North Dakota, Montana and Wyoming. Her characters are strong because the land demands it. Anita Mae likes to write characters who sit up and notice when that special person God’s chosen just for them walks by. The story is all about the courtship between the two main characters. But it won’t be an easy path. And if they don’t know about God at the beginning of the book, they will by the end. Anita Mae has finaled in the 2009 Linda Howard Award of Excellence contest in the Inspirational category, the 2008 Gateway to the Best in the Contemporary Series category, and the 2008 Golden Gateway in the Long Contemporary category. She’s currently waiting to hear the phone ring and have someone say they want to buy Emma’s Outlaw. Meanwhile, she’s working on another story and trying to keep her imagination in check. A pathological picture taker, she usually has a photo or two of the quirky world she lives in on her blog at
http://anitamaedraper.blogspot.com/
Posted by Anita Mae Draper at April 09, 2011