By the rude bridge that arched the flood,
Their flag to April's breeze unfurled,
Here once the embattled farmers stood,
And fired the shot heard round the world.
From "Concord Hymn" by Ralph Waldo Emerson


On April 19, 1775, the colonial period of American history drew to a close at the battles of Lexington and Concord. And thus, began a revolution that changed the course of history. Have you ever wondered what those colonists would think of America today? Would they recognize it? No, I'm not thinking of politics or technology or culture or religion.

Hey, it's spring, and I just spent my morning planting tomatoes. Now there is a quintessentially American plant, used by the Aztecs for centuries before Europeans arrived. But the people of Europe feared the tomato might be poisonous, so it did not become a common food source, even in America, until the mid-1800's.

There is a comfort in the familiar--just try offering a new food to a young child. Or maybe a middle-aged one for that matter. And so it was with those early colonists who brought many of their own preferred foods with them.

Some years ago, I was trying to discover what colonial America would have looked like. I live in a wooded, semi-rural part of Southeastern Virginia not far from Jamestown, the first permanent English settlement in North America. You would think the view from my window would be similar to what John Smith saw in 1607. It isn't.

Old World diseases, such as the chestnut blight and Dutch elm disease, have permanently changed the landscape of North America, wiping out entire forests. They have been replaced by introduced plants. My azaleas, currently blooming in lovely shades of purple, trace their ancestry to Asia. So, too, my camellias, crepe myrtles, and Japanese cherries. And then there are the fruits. Did you know the orange, lemon, cherry, apple, pear, and peach (to name just a few!) are all non-native to North America? So much for the all-American apple pie.

Some introduced plants fared so well in their new home they have become pests--like the mulberry, mimosa, Japanese honeysuckle, multiflora rose, and common dandelion. Yep, the dandelion, the scourge of suburban lawns everywhere, didn't arrive in North America until the mid-1600's when the Puritans brought the plant to New England. 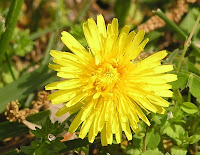 Those Puritans were more concerned with survival than nice lawns. Pick dandelion leaves early in the spring and mix with other greens for a salad. Or cook and serve them with a bacon dressing. Or use the leaves in place of spinach in dishes such as lasagna. You can coat the flowers in cornmeal batter and fry them in oil to make dandelion fritters or use them into make dandelion wine. If you are a teetotaler, roast the roots to make a nutritious coffee substitute. But be sure to save some of the root for your vegetable soup. Best of all, that dandelion dinner will keep you healthy--the leaves have more beta carotene than carrots and more iron than spinach.

Not feeling well? A dandelion tea supposedly helps kidney function, including the treatment and prevention of kidney stones. Keep looking your best with a dandelion lotion to treat dry or sallow skin. And the savvy fashionista can create her own red fabric dye from dandelion roots.

With no way of foreseeing how pervasive dandelions would become, it is understandable why the Puritans brought such a versatile plant with them. And yet, most of us see the dandelion as an annoying, nearly-impossible-to-kill weed.

It strikes me that we frequently treat people the same way, seeing only how they inconvenience us. Have you ever had a disagreeable neighbor? An irritating relative? A demanding child? (Why can children play quietly for hours--until Mom gets on the phone?) How dare they interrupt our plans, embarrass us in public, and disturb our quiet! It's rather like that beautiful green carpet of grass being blemished by those splotches of dandelion yellow.

Too often, however, we see the weed. We fail to see people as God does, intricate flowers of fallible humans whom He loves. Jesus told us that "God so loved the world" (John 3:16). Even those we perceive as unloveable, God sees as His creations, made in His image.

Have you tried dandelion? And have you ever consciously looked "beyond the weed" and been surprised by what you found?

C.J. Chase writes for Love Inspired Historicals. Her debut novel, the winner of RWA's 2010 Golden Heart award for best inspirational romance, will be available in August under the title Redeeming the Rogue. C.J. lives in the swamps of Southeastern Virginia with her handsome husband, active sons, one kinetic sheltie, and an ever-increasing number of chickens. When she is not writing, you will find her gardening, watching old movies, playing classical piano (badly) or teaching a special needs Sunday School class. You can read an excerpt of her book at: http://www.cjchasebooks.com/
Posted by C.J. Chase at April 19, 2011