Do you ever wonder what's going on with the world? There's certainly no lack of devastation, gloom and doom being reported every night on the news. Earthquakes, tsunamis, global warming, threat of nuclear reactor melt-downs, wars, famine, terrorism, Charlie Sheen... disasters abound. 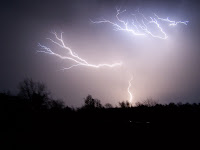 I can almost guarantee that you or someone you know has recently said something like this: "Jesus must be coming soon. How much worse can it get?"

It seems like a sensible question, but in reality, people have been asking it since the beginning of Christendom. The apostles were sure Jesus was returning soon. Things were so bad for them, they were being killed for their faith. Certainly that meant Jesus was coming for his bride pronto.

Think back over the decades... earthquakes, wars, and catastrophic events are nothing new. (Charlie Sheen, on the other hand, is a phenomenon of the media saturated age we live in. We all should pray for Charlie.) Also not new are the "profits" who claim to know when Jesus is coming back. Some of these folks are charlatans who pray on people's fears. Some are well-meaning Christians who believe that God has given them insight to the second coming. But whenever I hear someone quoting a date for Christ's return, I always think, "Okay, I know for sure that's NOT when Jesus will come back." Why? Because of this:

But in those days, after that tribulation, the sun will be darkened, and the moon will not give its light; the stars of heaven will fall, and the powers in the heavens will be shaken. Then they will see the Son of Man coming in the clouds with great power and glory. And then He will send His angels, and gather together His elect from the four winds, from the farthest part of earth to the farthest part of heaven.


Now learn this parable from the fig tree: When its branch has already become tender, and puts forth leaves, you know that summer is near. So you also, when you see these things happening, know that it is near—at the doors! Assuredly, I say to you, this generation will by no means pass away till all these things take place. Heaven and earth will pass away, but My words will by no means pass away.


But of that day and hour no one knows, not even the angels in heaven, nor the Son, but only the Father. Take heed, watch and pray; for you do not know when the time is.


No one knows the day and hour. Not the angels. Not even Jesus. Only the Father. (I don't pretend to understand how one person of our triune God can be the only one to know something. I just believe what it says.)

That's not to say there's anything wrong with studying Bible prophecy, end-times, the Book of Revelation, and so forth. In fact, I'm fairly certain we're going to see a slew of end-time books coming out in the next few years. The Left Behind series is already being repackaged and marketed through a new campaign. Fiction and non-fiction books on this topic will abound.

So, when is Jesus coming? I have no clue. What I do know is that he wants us to be ready, but not fearful.


It is like a man going to a far country, who left his house and gave authority to his servants, and to each his work, and commanded the doorkeeper to watch. Watch therefore, for you do not know when the master of the house is coming—in the evening, at midnight, at the crowing of the rooster, or in the morning—lest, coming suddenly, he find you sleeping. And what I say to you, I say to all: Watch!”
(Mark 13:34-37 - NKJV)

The next time the news gets to be too much, turn off the TV, throw away the newspaper, and say a prayer. A prayer of thanks for God's goodness, and a prayer of mercy, grace, and peace for those who still haven't surrendered to him. Then live your life with power, with love, and with a sound mind.

What about you? How do you handle the dismal news that bombards us on a daily basis?