On June 18, 2012, we will celebrate—or not—the most audacious declaration of war this country has ever made. Our Navy consisted of seventeen seaworthy vessels and four unseaworthy ones. Great Britain boasted 1,048 ships and over twenty times as many men and guns, not to mention their level of experience in fighting on land and at sea. Yet we had endured enough of their insults, seizing our ships, impressing men we recognized as naturalized American citizens, and telling us where and with whom we could trade. I’ve often wondered if Parliament burst into guffaws when they received the news. More than one politician surely believed they would enjoy the riches of the United states once again when they became British colonies for a second time.

How we failed miserably on land, how our privateers decimated the British merchant fleet until they cried uncle and gave up, and how we are one of the few countries who has survived the burning of the capital without succumbing to defeat, are enough subjects for a whole series of posts. And it’s not what this one is about, despite how fascinating a subject it is for me, who has two books out and a third coming out, my master’s degree thesis novel and a short story published many years ago that  prominently feature issues pertaining to the War of 1812. This article is about something that occurred months after the war ended.

Although I’d studied the War of 1812 in school, considering it gave my home state to the United States, and found the entire conflict fascinating, I never read about Dartmoor until an author I liked mention that Kenneth Roberts was the best historical novelist of the twentieth century. I went looking for his books, found The Lively Lady, and fell in love.

How could I not with a handsome privateer captain hero, a beautiful lady, and forbidden love mixed with the adventure and danger? Not to mention the writing was just plain great, descriptive, entertaining… But this isn’t a review; it is the background to an introduction of a nearly forgotten page in our history, one of the reasons why Americans’ hatred for the British lingered for decades.

Dartmoor, which some of you will recognize from A Necessary Deception’s first scene, was built in 1805-09 as a prison for the French. Perched high on Dartmoor about seventeen miles from Plymouth, it seemed to attract bad weather—snow, rain, hail. It was crowded, filthy, and bleak to say the least. The men were underfed and, by April of 1815, angry.

Yes, I said 1815. The war ended on Christmas Eve of 1814, but nearly four months later, numerous American prisoners—about 5,000 mostly from privateers—still moldered behind the double stone walls. They were allowed to play games, do their laundry, and socialize in the prison yard. They carried out a market where they could buy and sell goods to augment their poor supplies of food and clothing, but they were still in prison when they should be returning home.

The reason for this continued confinement is fairly simple. Neither side could agree on the interpretation of Article III of the Treaty of Ghent regarding the exchange of prisoners. In short, who paid to send the men back. The British held far more Americans than did the American held Englishmen, so their expense was greater. So while the politicians took their good, sweet time about working out these arrangements, the Americans grew more and more restless, taunting their guards from the Somerset Militia, and being generally rowdy until April 4, 1815, when they rioted over food. 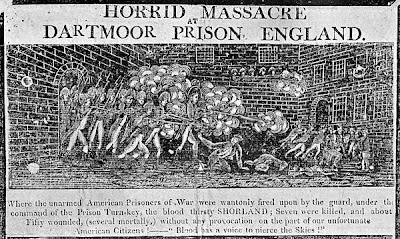 Thomas Shortland, the commander of the prison, possibly for revenge, issued the men eight pounds of hard biscuit instead of the usual twelve pounds of fresh bread. The men broke into the prison stores and got their soft bread, and returned peaceably to their barracks afterward.

The British were on alert, though, perhaps a bit trigger-happy and nervous. The prisoners wanted to go home, wanted better living conditions, and didn’t appreciate being cheated out of their rations, which were little enough as it was. Anxious men with guns were about to meet angry men with guts.

How the massacre started and who is to blame is still undecided. Weeks of investigations and a trial for the prison commander, Thomas Shortland, reached two conclusions—The British blamed the Americans, and the Americans blamed the British. And some British militiamen blamed their own side, and some American… You get the picture.

The incident started innocently enough, or so the Americans claim. Several prisoners were playing a ball game in the prison yard. The ball flew over the wall. Prisoners shouted for the guards to send it  back. The guards ignored them. So the men started digging a hole under the wall.

When the guards discovered the hole, they presumed, because of what happened with the bread two days earlier, the prisoners were trying to break out. Shortland ordered the alarm bell to be rung. That would send the men back to their barracks. Prisoners started to obey. Most of them anyway.

But the Somerset Militia began to fire. Americans threw stones at the guards. Stones against musket balls.

Chaos reigned. Prisoners ran for cover only to find their barracks locked against them. Those who had reached shelter discovered it wasn’t all that safe. Shots burst through the windows and men inside fell.

Rumors and claims abound over what went on that hellish spring evening. Some say militiamen chased a wounded man into a corner and fired into him until he died. Others claimed guards shot an already wounded man lying in the mud. Some claim the stones flew first and others claim the musket balls flew first. The bottom line of truth lies in around seventy Americans dead that night or succumbed to their wounds later.

Four months after the peace treaty was signed.

I have barely skimmed the surface of the events leading up to what Kenneth Roberts calls The St. Bartholomew’s Day Massacre, an allusion to the sixteenth century mass murder of thousands of Protestants in France. Just shy of two hundred years after the war, we still do not know who is responsible for the violence that day. We only know that it never should have happened.

From the little information given here, who do you think was to blame for the massacre?

How would you handle this scene if you were writing it into a novel? 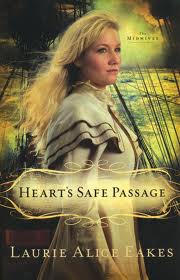 Laurie Alice Eakes used to lie in bed as a child telling herself stories  so she didn’t wake anyone else up. Sometimes she shared her stories with others; thus, when she decided to be a writer, she surprised no one. Family Guardian, her first book,  won the National Readers Choice Award for Best Regency in 2007. In the past three years, she has sold six books to Baker/Revell, five of which are set during the Regency time period, five books to Barbour Publishing, as well as two novellas to Barbour Publishing and one to Baker/Revell. Seven of her books have been picked up by Thorndike Press for large print publication, and Lady in the Mist, her first book with Revell, was chosen for hardcover publication with Crossings Bookclub. She also teaches on-line writing courses and enjoys a speaking ministry that has taken her from the Gulf Coast to the East Coast.

Laurie Alice lives in Texas with her husband, two dogs and two cats, and is learning how to make tamales.

You can learn more about her and her work at http://www.lauriealiceeakes.com