The Story Behind Walks Alone by Sandi Rog 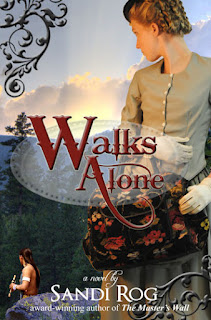 A Cheyenne warrior bent on vengeance. A pioneer woman bent on fulfilling a dream.
Until their paths collide.
After fleeing her abusive uncle, Anna is determined to reach the city of her dreams. But White Eagle and his fierce warriors take her prisoner. Anna attempts a harrowing escape, but her savage captor is determined to have her at all costs and forces her to be his wife. Has God forgotten her, or does He have plans of His own?
A man with a boot in one world and a moccasin in the other, White Eagle is disillusioned with his faith after a minister leads a massacre on his peaceful tribe. Where is his God? He's definitely not with the white men who are slaughtering his people. But White Eagle also can't give in to the idolatry practiced by his fellow tribesmen. Only the Truth can set him free.
And it's found in beautiful Anna’s carpetbag.
Dear Readers:

I’m originally from Colorado and recently moved back to the States after living in Holland for thirteen years. But it took moving to the other side of the world to discover the truth about my home state and what happened to the Cheyenne Native American tribe, along with the Arapaho and Lakota tribes and other Nations, on the morning of November 29, 1864. This incident is known today as the Sand Creek Massacre.
Most of the events in this story related to Colorado’s shameful past are true and accurate according to history—the massacre and its details (e.g. the toddler on the banks of Sand Creek), the popular saying in Denver “nits make lice” (a saying that made it acceptable for soldiers to murder innocent children), and some of Anna’s words and experiences when she’s abducted (taken from other white women who were abducted).
Cheyenne Chief Laird Cometsevah (a.k.a. Whistling Eagle) has approved Walks Alone’s accuracy and is touched that a part of his tribe’s culture and history is being told. While the Sand Creek Massacre is a disturbing event, I hope to not only give the Cheyenne tribe a voice, but to shine light on the hearts of these people.
Although my main character, White Eagle (a.k.a. Jean-Marc) is fictional, you’ll notice he comes strikingly close to resembling the real man George Bent (a.k.a. Beaver), half-breed son of William Bent, frontier tradesman. George Bent was educated in white schools, fought in the Civil War, was at Sand Creek during the massacre, and then became a Dog Soldier and fought in the Indian Wars. His father was a Christian and his mother was a Cheyenne native, and he struggled between their two beliefs. It’s because of George Bent that we are able to know, not only the historical accounts of the Cheyenne, but also their cultural practices.
Come with me now as you read a story of forgiveness and love, unleashed in a world of misunderstanding and hate.
***
This is the note I wrote to readers before they start reading Walks Alone. I want them to know that this is more than just a romance. When I first started this story, I was hoping for an easy book that wouldn’t require too much research. I was needing a break from ancient Rome, where my other books take place. So, I figured, how about writing a story based on my home state? What I didn’t realize was how much I didn’t know about my homeland. I walked and played on the ground where Cheyenne roamed. I had never heard of the Cheyenne before starting on my book. It amazed me that I hadn’t learned anything about them in school. I was heartbroken when the stories of the Cheyenne came to my knowledge. Was this truly the “land of the free?” Free for white men, sure. But not for Native Americans.
If you’re interested in the truth of what happened, watch this video:  The Sand Creek Massacre
I talked to a few Cheyenne and asked them if they prefer being called “Native Americans,” and if they felt insulted to be called “Indian.” In reality, the tribe members I spoke with didn’t want to be called “Native Americans” (who can blame them?) and preferred the name “Indian,” saying “That’s who and what we are.” Why should they be ashamed of that? They said what insults them today is the name Redskins, which is the name of a popular football team. Of course, I’m sure these opinions vary, but it was interesting to hear the feedback from a few tribal members.
If you watch the video above and follow other links to other videos that tell the true account of the Cheyenne and other tribes, keep a box of tissues by your side. These are true events, not children’s tales. When I learned the truth, I had to tell their story. I had to give them a voice.
Sadly, Hitler was not the only one to commit genocide in this world. We had our own “Hitlers” right here in “the land of the free.”
~~~~~~~~~~~~~~~~~~~

Sandi Rog is an award winning author, her debut novel The Master’s Wall winning the 2011 Christian Small Publisher’s Book of the Year Award. She lived in Holland for thirteen years and now lives in Colorado with her husband, four children, a cat, and too many spiders.
Visit her blog: http://sandirog.blogspot.com/
Order Walks Alone on Amazon: Available for kindle and pre-order
Order Walks Alone in other ebook formats: http://www.ebookit.com/books/0000001445/Walks-Alone.html
Posted by Dina Sleiman at March 27, 2012