by Anita Mae Draper
I'd like to introduce a special lady, Biblical fiction author,
Mesu Andrews, who shares her personal story of discovery here.
May it bless you as much as it has blessed me.

Mother-Daughter Wars
By Mesu Andrews
Why do so many women experience a love/hate relationship with their mothers? Our mothers give us life, kiss our boo-boos, and tie our bows. But they also train us to be polite, eat our vegetables, and scour toilets. A mother-daughter relationship is complicated from the beginning, but my mother and I were doomed to tangle when theology became the family battleground and Scripture the weapon.
﻿
﻿My mom has always been a beautiful, confident woman. As the daughter of the county prosecutor, Mary Newton was the middle of three girls and sang like an angel. Her operatic recital was as close to heaven as she thought she’d get since she was playing devil’s advocate with the preacher’s son. Charley Cooley was the star of the basketball team and the poorest kid in school. His father pastored a small country church, and the coach had to beg Charley’s folks to let him play the heathen sport. The only thing Charley like better than basketball was Mary. Neither cared much about the God Charley’s parents adored.

After a few years of marriage, the road got rocky, but Charley and Mary persevered for the children’s sake. A daughter was born and five years later a son. The perfect family, right? When Mary was 35 years old, her children fourteen and nine, she thought life would once again become her own—and then a terrible blow. Pregnant again! A third child. No! she railed at God, this invisible power who had played a cruel joke. How could He? How dare He? Why would He?


Because I love you. I’m giving you a child so you will LIVE. I gave my son to DIE for you, so you can LIVE eternally with me...
The realization that she had NO control over her life drove my mother to accept Jesus as her Savior. Control. She’d always fought for it, but if she must surrender, she would do it with excellence. My mother does nothing partially or with mediocrity. So when she became a Christ-follower, the whole world was placed on notice. They were in dire need of salvation, and it was her mission to tell them!


My dad, on the other hand, was suffering from a bit of whiplash—the sudden change from his worldly wife to Missionary Mary—which he remedied by taking our family to a nearby Quaker church. He attended Sunday school, while the rest of the family endured the whole morning. I was about six years old when my mom felt called to a Charismatic church—my dad didn’t feel the same call. Thus began Church Wars at my house.
﻿


My first memories of family changes involved things like Christmas—we quit celebrating it. I spent childhood Christmases at my best friend’s house or boyfriend’s house. I wasn’t allowed to go trick-or-treating or participate in some of the parties at school. The changes caused terrible tension between my parents. I remember them almost divorcing because of it.
As I grew older, my parents let me choose whether I would attend church with mom or dad. Now, think about it. When you were twelve years old, would you rather attend a three-hour, marathon worship/sermon or a ½-hour Sunday school? I opted for Dad’s church and Sunday school class, making me mom’s evangelist target.

The harder she pushed, the further I strayed from God. By nineteen, I was an alcoholic and was deeply committed to an unhealthy five-year relationship that I thought would end in marriage. He simply decided it should end. I thought my life was over—and tried to make it so. My best friend saved my life in more ways than one. She arranged for her boyfriend, her and me to go out as a foursome with an old high school friend of ours. We were all sophomores in college at the time. Her one caution? “He went to a Texas college last year on a basketball scholarship and got religion. The scholarship dried up and he had to move back home, but I heard he’s a little weird.”
﻿
﻿My reply? “I’ve been around religion all my life. I can handle weird.” But our old friend showed up in a tie to take me to a football game—and that was the most normal thing about that night. He was totally changed from the hot-tempered, foul-mouthed jock I’d known in high school. We’d been good friends, held much in common. But this young man of peace and a gentle spirit was completely new to me. This guy’s God was real. This Jesus was more than just a topic for debate at the dinner table.

Three months later, we knelt together on my parents’ living-room floor and prayed. He led me to a saving relationship with Jesus Christ. The next morning, I emptied all my bottles of Jack Daniels down the sink. My mom happened upon the scene and was a little more than shocked. I said, “I gave my life to Jesus Christ last night.” Before she could gush, I added the words I knew would cut her deepest. “I’m following Roy’s God. Not yours.” I saw the words wound her, and the satisfaction I thought they’d bring didn’t come. Why do daughters intentionally hurt mothers?

A few weeks later, Roy and I were engaged, and my mom laid another bombshell at our feet. She could not, in godly conscience, attend our wedding if we chose to have it in a denominational church. My initial reaction was outrage, but my amazing husband asked me the most important question I’ve ever been asked. “Is your mom doing this to hurt you or to honor the Lord with her whole heart?”

There have been many times since that I’ve asked that question about my mom. Her convictions run so deep, her devotion to Jesus is so strong. My husband and I were married at a Holiday Inn banquet hall, and my mother was there to see it. I will NEVER regret that decision. It was a beautiful day, and my mom made my pure white going-away suit. There was love in every stitch.

Years passed and wounds healed. My mom became my best friend during those years when we moved and friendships were difficult to forge. We still struggled to agree on spiritual matters, but she was my lifeline when it came to everyday topics and emotional health.

My husband was called to vocational ministry. He attended seminary in Ashland, OH, and we served our first church in northern Indiana. A group wanted to travel to Israel, to explore the Promised Land, and we decided to open registration to those outside our church family. My mom was excited to join us. Those ten days are some of the most precious memories of my life. Our baptismal day at the Jordan River was a special treasure—even our Jewish guide was moved to tears. My husband who prayed me into the Kingdom, baptized my mother who brought me into this world—and then he baptized me. 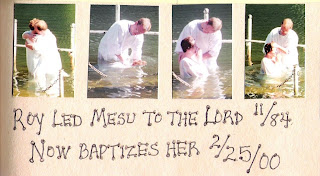 A few days later, we were given the opportunity to plant a tree in Israel, to make a contribution to new life in the Promised Land. For my mom and me, it planted a seed of newness, enabling us to share spiritually like never before. The scabs and scars of past battles, that once made spiritual sharing uncomfortable, were washed away in Jordan’s muddy waters.

My mom no longer sees an evangelistic bulls-eye painted on my chest; and she’s no longer the door-to-door salesman I ignore, pounding on my heart. I truly believe that the Lord used my childhood confusion to motivate my hunger to know the Scriptures personally. When I come upon a confusing biblical passage, I don’t skip over it. No way! I MUST know its author, context, audience, etc. in order to gain some insight from the Holy Spirit’s whisper before I can move on!

And guess who I call when I get an especially insightful lesson from God’s Word? Yep. My mom. We are friends, confidantes, mother and daughter. No other relationship compares.
﻿

﻿Questions for today... stop by and chat ...
- What spiritual positives have evolved from hard circumstances in your childhood?
- If you could visit anywhere mentioned in Scripture, where would you like to explore?

- To which biblical character do you relate and why?

Mesu is giving away a copy of her new release, Love's Sacred Song to one person who comments on this post before midnight, Friday, March 16th. Use this format to avoid being tagged by spammers and those weird cyberbot spider things: awesomeinkwellinspyreader(at)mail(dot)com.


Names will also go in for the 1000th Post Party (With Prizes) draw going on all this week. Click the link for details.

Mesu Andrews is an author and speaker who has devoted herself to passionate and intense study of Scripture. Her debut novel, Love Amid the Ashes, released in March 2011. Her second novel, Love's Sacred Song,  is a March 2012 release. You can find Mesu online at http://www.mesuandrews.com/ where she talks about her books, her name, her Chronic Illness Battle and other information.
﻿
Posted by Anita Mae Draper at March 14, 2012