Head to the majestic Northwest where logging history comes to life in four Christmas romances. Insecurity brings a logger and a young woman together, but will a “perfect” sister tear them apart? Will the dangers of the woods derail a young couple’s hopes and their chance at love? Amid town gossip, can a work-focused sawmiller win the heart of a prim-and-proper heiress? Will second thoughts have a sentimental girl and a hardhearted carpenter losing love? Find the answers in this heartwarming holiday collection.

Every week for the last two years, E.V. Renier has petitioned the local brewery magnate for permission to marry his daughter. Despite receiving a sound rejection each time, E.V. continues in hopes of proving the faithfulness of his character. Heiress Larkin Whitworth has no idea the quiet yet determined sawmiller's devotion. Not until awful rumors about her rip through the town. As the annual Christmas soiree approaches, Larkin fears E.V.'s love might not be as strong as the shameful truth she's trying to hide.

Even though Christmas is still a few months away, I thought in honor of the release of my Christmas novella I'd share an excerpt.


"All Ye Faithful"
by Gina Welborn


At the harshness of Leonard’s tone, E.V. felt a ripple of tension center between his eyebrows. He didn’t mind helping Silas Leonard secure a husband for his oldest daughter, but his feet were aching, his mouth parched, and stomach rumbling, and if the barn grew any warmer from the body heat of all the wedding guests, he’d have to shed the black tailored coat he’d used his last bit of savings to purchase two years ago to wear to Larkin’s birthday party in hopes of attracting her attention. Still, he needed the contract, and if Leonard wanted to talk, E.V. would listen.


He opened his mouth, intent on uttering his well-practiced “yes sir,” when the sweetest voice he’d yearned to hear say, “Yes, I’ll marry you,” broke the taut silence.


E.V. found his breath and turned to Larkin, now standing close enough for him to pull her into his arms for a lengthy kiss. Loose strands of her black hair caressed the sides of her high cheekbones. He ached to pin them back into the neat and tidy bun she always wore underneath a hat she was forever taking off and forgetting. Whenever she smiled—and he prayed she wouldn’t at this moment, for his sake—the dimples on the sides of her mouth testified she’d inherited all the beauty of her part-Chinook mother and the whimsy of her Irish-English father.


Everything about her took his breath away.


“Yes, a word, Miss Whitworth,” E.V. blurted before Silas Leonard could make another demand. “We could speak over by the punch table.” He motioned that direction. “I could use a drink.” Remembering the contract he needed, he met Leonard’s intense gaze. “We won’t be but a moment, sir.”


E.V. stepped to Larkin’s side, touched the small of her back in the most platonic manner he could possibly manage, and nudged her into walking before drawing his hand away from her. He focused on keeping the distance between them not too close to appear as anything but friends. When she would close the gap, he would ease to the left, keeping propriety in mind.


Since she said nothing, he remained silent also as they wove through the wedding guests joining the line for another dance. Though Larkin was several inches shorter than Miss Leonard, he couldn’t—nor did he want to—shake the feeling that Larkin was perfectly made for him. To think their relationship began over a tray of cookies spilled by Miss Leonard’s brother.


And he had spent enough of that on his knees in prayer during almost two years of having his marriage proposals rejected by her father, to know he also needed a miracle in the form of a large lumber supplier—Silas Leonard. Once he’d built Renier Lumber Company into the most profitable mill in Tumwater—and one more large supplier would do it—he’d prove his work ethic, worthiness, and his ability to provide for Larkin to her wealth-focused father.


They stopped at the refreshment table. Larkin filled a glass of punch, handed it to him, then picked up a plate and looked over the food offerings.


Aware of how alone they were, yet at a public event, E.V. found himself admiring the curve of her neck and the finger-length strands of hair escaping from the bun, which seemed even blacker against the yellow and ivory stripes of her silky gown. He clenched the punch glass. He wasn’t going to touch her. Wasn’t. Not even when the distance between them was less than an arm’s length.


Was there anything in life he desired more than her?


“I hope you like egg salad and smoked salmon.”


“They seem to be the norm at weddings here in Tumwater,” Larkin continued, “which is why I intend on having something totally different when we—umm, when I marry.” Her head tilted to the left as she looked up at him, and her mouth curved enough for him to see hints of her dimples. “Were you paying attention to me?”


And he felt as much irritation as joy in being this close to her.


Understanding exactly how a parched man viewing an oasis felt, E.V. downed his punch. Two years of waiting. Two years of once-a-week marriage requests and immediate rejections. Two years of answering even the most obscure question about his family while enduring reminders of his father’s failure from Larkin’s father. E.V. had been steadfast, resolute, and patient. By remembering his sinful nature was dead and Christ now lived through him, he could endure as long as needed. The reward was too great to give up now.


The prize—Larkin—was too precious to lose.


“You wished to speak to me?” he asked as the musicians began another tune. Immediately he regretted the exasperated sound of his tone. Since he couldn’t explain to her the struggle between his honor and his desires, he simply mumbled, “Sorry. Please, go on.”


“Yes.” Looking unsure of herself, she took the punch glass and gave him a plate of finger-sized sandwiches. “E.V., I know we—you—well, at least I felt there was something special between—”


She broke off, and her gaze shifted as if to see who was watching them.


E.V. glanced to his right and groaned.


Miss Leonard strode purposely toward them, her progress occasionally halted by couples exchanging partners in the brisk dance. “Mr. Renier!”

QUESTION OF THE DAY:: Ever had an "Abigail Leonard" in your life? How do you deal with people who seem only out for their best interest? Do you secretly look forward to their comeuppance? 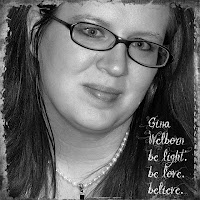 GINA WELBORN is an author, mother, wife, and currently has changed her Level 4 brown hair to Level 7 blonde. She's still debating if she likes it. For those of you who are far more interested in what Gina writes than in her hair-color dilemma (gray hair causes one to take drastic measures), her first novella "Sugarplum Hearts" released in February 2012 in HIGHLAND CROSSINGS. Her second novella "All Ye Faithful" in A CASCADES CHRISTMAS is available at Wal-Mart, Amazon, CBD, Barnes and Noble, Marvel,  Parable, as well as other local Christian bookstores and online distributors. Gina resides in a wee little town outside a larger (but not large) town in Oklahoma. Thanks to her pastor-husband's ability to spray a fabulous chemical called Demon, her children don't get to enjoy raising hunter spiders, grasshoppers, and crickets. While they are (mostly) saddened, Gina is delighted.
Posted by Unknown at October 17, 2012