by Debra E. Marvin
I’m pleased to recommend a book I had the chance to read last year and again just recently:
Dina Sleiman’s Love in Three Quarter Time,
available this month as the first book from the new Zondervan First line.

Virginia 1817. Just when Constance Cavendish, the belle of Richmond, is most sure of a successful future with handsome plantation heir Robert Montgomery, her world falls apart with a friend’s betrayal.

Five years later, with no father, income or home, the Cavendish sisters and their mother face a future of genteel poverty—and they are not doing well. A fine gentleman caller is hoping to remedy the situation by marrying the lovely Constance, but she has other ideas. No longer the fiery center of society, Constance is made practical by circumstances and decides to use her only skill and pursue an occupation. Taking on a trade drops her from polite society but she has no choice and sets out to become a dance instructor. (A popular occupation at the time for European men, not young ladies of breeding.)

To avoid the disdain of her neighbors, she seeks employment in another county, and finds it. Not just any family of daughters, but the sisters of Robert Montgomery, the man who abandoned their relationship when her father fell in disgrace.

Constance must succeed and swallows the last of her pride. Robert is the last person she wants to see.

Likewise, Robert is shocked when he returns home to find her pretending to be an English dance teacher. A rush of conflicted feelings, including guilt and regret, surface for the woman he’d once planned to marry.

In a setting of the early south, during the Federalist period of Jefferson’s Virginia, revolutionaries now seek to fight for personal rights – rights of slave owners, or rights of slaves? Along the way, Constance meets a fascinating man unlike any she’s known before. Handsome Lorimer is an compelling itinerant preacher who encourages her in a new discovery of faith by showing her insights into the world of slavery, and insights into her true self.

Constance’s sisters and her unlucky beau back at home round out a cast strong enough to fill this rich setting of history, plantation life, dresses and dances, and the interaction of classes and race.

This is much more than a historical romance about a heroine forced to rebuild her life. Dina’s writing is beautiful and the many facets of the story and its character left me with little desire to put the book down.  Constance grows through each new revelation, and allows God to guide her through the dance of life even if she is unsure in her choice of partner. 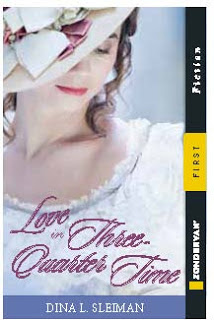 Constance had never experienced anything like the entry hall of Monticello. More a museum for curiosities than any sort of proper foyer. Maps, artwork, Indian feathers and artifacts, even a wall covered with antlers. The double faced clock featuring a system of weights to track the days of the week was nothing short of a scientific marvel.
She had thought the interior architecture would be similar to White Willow Hall since the brown brick exterior with white columns and dome seemed to match. But this home featured soaring ceilings and balconies unlike White Willow’s more basic two story construction—Jefferson’s fascination with light, space, and time evident throughout. As she toured the statues and the griffin frieze, she clung to Lorimer’s arm.
Robbie bounded through the front door, full of energy for the first time in weeks. “Good evening, all,” he called.
At that moment the elegant, dark-haired Patsy Randolph, daughter of President Thomas Jefferson and hostess of Monticello, entered through a side hallway into the enormous two story room.
“Welcome to Monticello. Mr. Beaumont, Mr. Montgomery, Lorimer.” She offered her hand to each of the gentlemen for a kiss, then turned to embrace the ladies.
“And you must be the Miss Cavendish I’ve heard so much about.” Mrs. Randolph had a warm, motherly air about her.
“All good, I hope.”
“Of course.”


I love the fact that Zondervan First is offering fiction of this quality for a very reasonable Ebook price, $3.99, and I am very happy to recommend this book! Please visit our week's worth of posts about Dina, the faith journey in this novel,  the new Zondervan First line, and C.J. Chase's  post on the evolution of the Waltz. It's been another great  Release Party week!

Love in Three Quarter Time is available now on Amazon, Barnes and Noble, and ChristianBook.com
Posted by Debra E. Marvin at October 26, 2012