Impressed by Love: By Our Own Lisa Richardson! 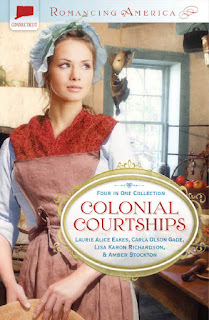 Well, the best kept secret in town is out. Our own Lisa Karon Richardson is finally in print in a bookstore near you! It’s kind of crazy the way it takes years and years for even the best writers to finally break into publication, and once you read “Impressed by Love,” I think that you’ll agree. Lisa is one of the best.

“Impressed by Love” is part of the Colonial Courtships novella anthology released last week by Barbour Publishing. Although I can’t say I’ve read all the stories, given the other well-published ladies involved, the entire collection sounds very promising.

Lisa’s novella is the concluding installment in the series and opens off the coast of Connecticut in 1762. Our lovely heroine, Phoebe, is aboard her uncle’s ship, being shuttled from her recently deceased grandmother to her uncle’s family. Phoebe’s main issue in life is loneliness and a strong desire for a family and a home. So when her uncle is severely wounded in battle, she refuses to let another person she loves die. Since the ship’s surgeon has been killed in battle, she orders the sailors to find the best physician in town and to bring him to save her uncle. And if that physician wouldn’t cooperate, then he could always be impressed into the Royal Navy.

Our handsome and gentle hero, Alden, just happens to be the best physician in town. But he has no desire to leave. In addition to his patients, he has a large and wonderful family that he could never abandon. When he refuses to tend the captain until he treats a man who has just been in a tragic accident, he is whacked on the head and impressed into Naval service.

Of course, Phoebe feels awful. She never considered anyone but herself. Now she is responsible for Alden’s kidnapping, and she must do something to remedy the situation. The story progresses from there with plenty of romance, adventure, lots of interesting history, and a fascinating peek into the world of colonial medicine.

My favorite part of the book (not surprisingly, I mean, have you met me?) was the spiritual aspect. Throughout the beginning of the book Alden sees his imprisonment as a tragedy. But was it really? He was healthy, reasonably safe, fed, and even pursuing his dream profession. Just in a different setting than he desired. And isn’t that so often the case with us? Anytime things get rough, we want to rail against them. Declare a tragedy.  But when Alden stopped and considered what God might want to accomplish, he began to see the situation through different eyes.

I’m so excited to announce that this elegantly-written little novella is just the first of many books to come for Lisa. Her Magistrate’s Folly, a short historical romance, will release with Barbour in January, and later next year, look for a full historical romance series by Lisa Karon Richardson and our Jennifer AlLee beginning with Eureka! And she has more novellas coming for us as well. In the meantime, enjoy the wonderfulness of “Impressed by Love” and let it whet your appetite for more goodies to come.

What would you do if you were Phoebe? Do you have any questions for Lisa about this book or any of the other upcoming ones?
Posted by Dina Sleiman at October 12, 2012