Award-winning author of Shadowed in Silk and Captured by Moonlight

A beautiful white wedding here in the western half of the world is so much nicer than a white funeral in the eastern half. Our brides wear white on their joyous day. Our eastern counterparts wear white when someone they love dies.

Yet, we all want the same thing—to experience the kinds of joy in life such as that which weddings bring.

As a Christian, I’m looking forward to that day when Christ calls His followers home and we have that grand and wonderful event. Like no wedding celebration ever before, when the Son of God claims His bride, the church.

But what I’ve been learning on the journey of life is that, in order to fully enjoy the plans God has for us here on earth and later in heaven, we need to go through a sort of funeral first.

As I was reading the devotional book My Utmost for His Highest by Oswald Chambers, he explained that as Christians we must have a sort of funeral for our life, our ambitions, our plans, that we must wear the metaphoric white funeral garments. Then, once our life is dead and buried, we can allow Christ to live His life through us. 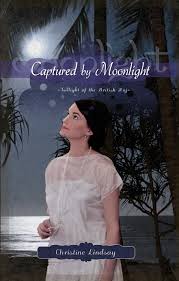 As I was writing Captured by Moonlight, this truth came alive for me in my Indian character Eshana.  When Eshana became a Christian, she turned her back on her Hindu traditions, and wore bright clothing to show her new-found joy in Christ. Her traditional Hindu uncle sees this and becomes angry. He kidnaps Eshana and forces her to have her head shaved again, and to wear course white widow garments—like funeral clothes.

What Eshana learns in the book is what I’ve been learning, that we can trust God, believing that His plans to use our lives for His glory, are in truth more marvelous than anything we could ever devise. Even if it hurts for a while, like in the case of Eshana.

Who of us doesn’t or hasn’t been hurt in some manner in our lives? We hate that aspect of life, but maybe we can surrender in trust to God. Give up what we think our lives should be like, and trust God to use even our heartaches and pain for something good.

In Captured by Moonlight my characters talk about a great Indian Christian, Sundar Singh. Sundar said, “A true Christian is like sandalwood, which imparts its fragrance to the axe which cuts it, without doing any harm in return.”

I wish I could say that I’m like Eshana in my book, in how bravely she stands for Christ, how she literally turns the other cheek when she is being abused. But I know that I am not.

However, the lesson that Eshana learns is one that the Lord wants us all to learn—we must die to ourselves in order that He may live through us. I am learning that bit by bit. And Eshana’s story has even inspired me as the writer.

How amazed I was one day in my devotions, to have the Lord remind me of the story I had written, as He urged me to follow in the example of my own fictional character as she follows Christ.

Romans  6:4 “Buried with Him…that…even so we also should walk in newness of life.”