Since today is Good Friday, I thought I would review two of my favorite Easter movies.

The first is really more of a Passover movie than an Easter movie, but since Passover is a depiction of Christ's atoning sacrifice for His people and since, of course, this IS Passover, too, I feel it is especially appropriate. 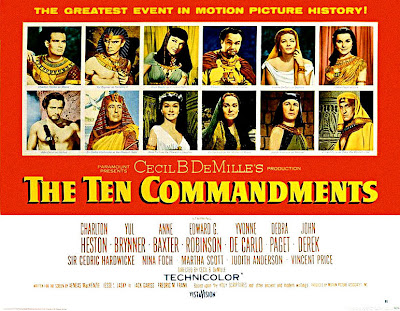 I'll be the first to admit I am a sucker for old movies, especially old movies in the style of the great Hollywood studios.  One of my favorite movies of all time is the 1956 version of The Ten Commandments.  Yes it's sometimes pompous and silly and often overwrought, but how could you resist that all-star cast?  Charlton Heston as Moses, Yul Brynner as Rameses, Anne Baxter as Nefretiri, Edward G. Robinson as Dathan, Yvonne De Carlo as Sephora, Debra Paget as Lilia, Judith Anderson as Memnet, Vincent Price as Baka, and John Carradine as Aaron.

I always especially enjoy Sir Cedric Hardwicke's sly performance as Seti and John Derek's earnest Joshua (maybe just because he was SO cute).  The movie is lush and always a visual delight and seeing death itself pour into Egypt's streets to claim the firstborn always chills me.  And, after the dramatic parting of the Red Sea and Rameses' defeat, I love to hear his grudging declaration concerning Moses' triumph:  "His God IS God."

The other movie I would like to review is Jesus of Nazareth.  Filmed in 1977 as a miniseries, it was directed by  Franco Zeffirelli, and his touch shows in the lavish sets and costumes.  Jesus is portrayed by Robert Powell, blue eyed and ethereal, not exactly Jewish, but his performance is touching and memorable. 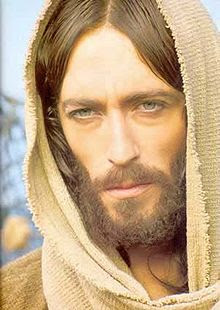 I particularly enjoy Olivier's Nicodemus as he puzzles over what it means to be born again.  The crucifixion scene, though I'm certain not as harrowing as the one from The Passion of the Christ, is certainly brutal and heartbreaking enough.  And when they take Jesus from the cross, in the pouring rain and His mother wails out her grief, I am always touched by Mary Magdalene kneeling silently in the mud, kissing His feet.

Of course, there are many movies depicting Jesus' life, death and resurrection.  Ben Hur is another in grand Hollywood style.  And King of Kings with Jeffrey Hunter is also a favorite.  Of course, Hollywood never seems to get everything exactly right, but this is truly the greatest story ever told, and it has power no matter how imperfectly it is portrayed.

I hope I'll get a chance to watch both of these movies this weekend.  What are your favorite Easter movies?

DeAnna Julie Dodson has always been an avid reader and a lover of storytelling, whether on the page, the screen or the stage. This, along with her keen interest in history and her Christian faith, shows in her tales of love, forgiveness and triumph over adversity. She is the author of In Honor Bound, By Love Redeemed and To Grace Surrendered, a trilogy of medieval romances, as well as Letters in the Attic and The Key in the Attic, contemporary mysteries. Her new series of Drew Farthering Mysteries will debut in the Summer of 2013 with Rules of Murder from Bethany House.  A fifth-generation Texan, she makes her home north of Dallas with three spoiled cats.