The Diary in the Attic 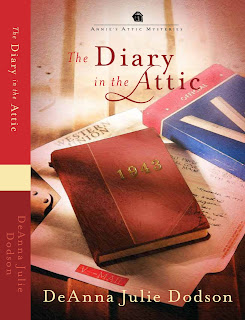 It’s always a special day when I can introduce a book written by a friend. The Diary in the Attic by fellow Inkwell contributor DeAnna Julie Dodson is part of the Annie’s Attic Mystery series.

While searching the attic for her grandmother’s Easter-themed table linens, Annie Dawson stumbles upon a box contain a diary (dated 1943) and other World War II memorabilia. Did the young couple in the letters marry or did war end their chance for a happily ever after?

From the inside front cover:

Lilly saw Mrs. Lambert standing in the front window, clutching the curtain in one hand and a paper of some kind in the other. She was at the door before Lilly could knock.
“Lilly!”
Sobbing out a broken torrent of German, the older woman pulled Lilly inside and sat down with her on the sofa. She held out the paper in her hand. A telegram. The telegram.
“Peter,” she managed to say. “Peter!”

Annie Dawson’s discovery of a diary in the attic of Grey Gables, the Victorian-era home she inherited from her grandmother, Betty Holden, has set her on a mission. The diary reveals a poignant love story from World War II, a story cut short when young Peter Lambert goes off to the European Theater, leaving his young girlfriend, Lilly Pryce, with a promise: He will come back to her.

But that promise is smashed when Peter’s mother receives notice from the War Department that Peter is missing and presumed dead while on a mission behind enemy lines.

She is also intrigued by the discovery of several V-mail letters form Peter to Lilly and several photographs. Annie wonders: Whatever happened to Lilly after Peter’s death? Where is she now? How did such personal belongings end up in her grandmother’s attic.

With the help of her best friend, Alice MacFarlane, and the other members of the Hook and Needle Club, Annie sets out to find the answers to this latest mystery. Along the way, they may also find the answer to that age-old dilemma: Can love once lost become love found again?

Annie locates the diary’s owner in an assisted living apartment near Stony Point. But what happened to Lilly’s handsome beau? The last available information from the War Department listed him as MIA. Can Annie discover his fate and bring closure to an 87-year-old woman’s remaining time—or will her questions resurrect old wounds and betrayals best left buried in the past?

This is a gentle mystery. And while Stony Point bears more than a passing resemblance to Jessica Fletcher’s (Murder, She Wrote) Cabot Cove—right down to the picturesque, Victorian-era coastal Maine town—you won’t find any dead bodies here.

The Annie’s Attic Mystery series is only available to subscribers in either (or both) hardcover and digital formats. You might also check your local library for copies. (And if you library doesn’t have them, be sure to ask if they will order them.)

If you like cozy mysteries with small town settings, here's a new series for you to check out.

Do you like mysteries? Do you have another favorite mystery series (either book or TV) that you think Inkwell readers might want to check out?