This week marks a significant anniversary, 150 years, of the three days of bloodshed and misery known as The Battle of Gettysburg, July 1-3, 1863. The war between the states began on April 18, 1861 with the firing on Fort Sumter. What began on both sides as a noble, patriotic cause for rights and the greater good had become years of tremendous loss and splitting apart of families and a grand nation.

In my youth, my interest in the Civil War began with a visit to Gettysburg where history is thick in the air. I had only begun to understand the idea and the loss. Over the years, movies and novels added to my interest and when I first played with the idea of writing fiction, Civil War history was my first choice as setting. I learned, however, that publishers weren’t buying “Civil War” unless you were a university professor.

I’m pleased that has changed, and extremely happy to tell you about author Jocelyn Green’s novels. I’m just a day away from finishing book one in her HEROINES OF THE BATTLEFIELD series, her debut historical fiction, Wedded to War, set at the beginning of the war.

Recently released is Widow of Gettysburg  (I have it and hoped to have finished in time to highlight it here. However, this is full family week of vacation aka 'crazy house'!) and I know she is putting the finishing touches to a third book that will include a setting in Atlanta. If you were one of the hundred thousand visiting Gettysburg this week, you might have had the chance to meet Ms. Green. 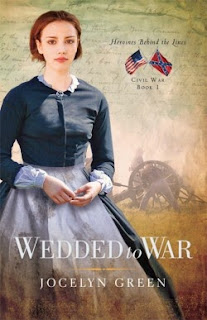 WEDDED TO WAR:
Based on the actual letters of a NY City socialite,  Jocelyn Green’s story is a rich historical fiction piece that for me, pulls it all together.  Setting details based on meticulous research, compelling characters from all sides of this story, and lovely, evocative prose. This is truly a story I wish I’d written. Just enough romance to round out the incredible lead characters without making this a historical romance.

The story centers around the beginnings of what we now take for granted--organized, federally based nursing of wounded soldiers. The United States Sanitary Commission actually struggled to prove the worth of female nurses as support for doctors during war, because the idea of females being able to tolerate the emotional and physical aspects was unheard of or considered implausible.  Ms. Green includes real-life characters in the background and integrates them into the story easily, as well as using a wide base of American life in the north as it struggled to understand why this quick little war dragged on. Much of this story takes place in Washington DC while war raged on around it, and includes a peek into high and low society in 1860s N.Y. City. I’m no expert but I learned a lot and none of it came across as the writer showing her knowledge or adding fiction elements to historical fact.
While the lead characters were from the north, this story takes no sides in the war and looked at it through the eyes of three characters struggling with the medical aspect. And, as a work of fiction from a Christian publishing house, the faith issues were very appropriate to the period and wartime. Wedded to War should be considered historical fiction with a touch of romantic elements – the elements of relationships expected of any well-rounded character. Therefore I would recommend it to anyone interested in a very well written novel and the Civil War setting.

I can’t wait to finish this book and move on to WIDOW OF GETTYSBURG. I am so thankful that these stories came along and for the incredible dedication evident in Jocelyn Green’s work. It is lovely writing with a pace that never falters and moves seamlessly from pain and triumphs on a personal level to that of a nation. Wedded to War is definitely going on my favorite books list!

Amazon’s Blurb: It's April 1861, and the Union Army's Medical Department is a disaster, completely unprepared for the magnitude of war. A small group of New York City women, including 28-year-old Charlotte Waverly, decide to do something about it, and end up changing the course of the war, despite criticism, ridicule and social ostracism. Charlotte leaves a life of privilege, wealth-and confining expectations-to be one of the first female nurses for the Union Army. She quickly discovers that she's fighting more than just the Rebellion by working in the hospitals. Corruption, harassment, and opposition from Northern doctors threaten to push her out of her new role. At the same time, her sweetheart disapproves of her shocking strength and independence, forcing her to make an impossible decision: Will she choose love and marriage, or duty to a cause that seems to be losing? An Irish immigrant named Ruby O'Flannery, who turns to the unthinkable in the face of starvation, holds the secret that will unlock the door to Charlotte's future. But will the rich and poor confide in each other in time?

Wedded to War is a work of fiction, but the story is inspired by the true life of Civil War nurse Georgeanna Woolsey. Woolsey's letters and journals, written over 150 years ago, offer a thorough look of what pioneering nurses endured.

Jocelyn Green's debut novel is endorsed by historians and professors for its historical accuracy and detail, by award-winning novelists for its spell-binding storytelling, and by entertainment journalists and book club leaders for its deep and complex content, perfect to share and discuss with others