As a novelist, obviously I don't agree.  Can fiction be used for evil?  Certainly.  Like any tool, its use depends on the intent and skill of the one who wields it.  But it is a powerful tool nonetheless.

Fiction, by definition, is made up.  It could be based on or inspired by true events.  It should be believable, even if it's impossible, but it is not real.  However, the best fiction is true. 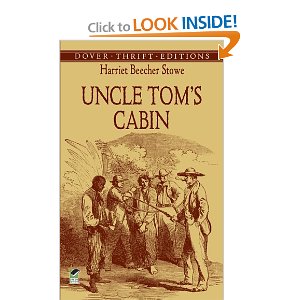 Of course it is.  Think of a story that really touched your heart.  Perhaps it affected you so much, it changed your way of thinking.  That's what a little book called Uncle Tom's Cabin did right before the Civil War.  It made the concept of slavery not just the abstract problem of "those people down there in the South" but the concrete sufferings of real human beings, people not so different from the readers themselves.  Uncle Tom was not a real man, but through him Harriet Beecher Stowe was able to show people truths about men like him.  It may seem dated to us now, but her fiction helped end slavery in this country.  President Lincoln himself called her "the little woman who wrote the book that started this great war." 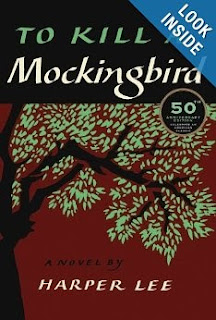 What about someone like Scout Finch from To Kill a Mockingbird?  She is not a real person either, but she is true, and through her innocent eyes we see very clearly the hypocrisy and injustice of her time.  Harper Lee could have written a long tract about her views on class and race and how we should treat our neighbors, and she very likely would have been ignored.  Instead, she showed us her truth.  She did not tell us how we were to feel about it, she merely showed us.  She let us see how one family dealt with the challenges they faced.  And, as Stowe did, she put a human face on those her readers might not otherwise see. 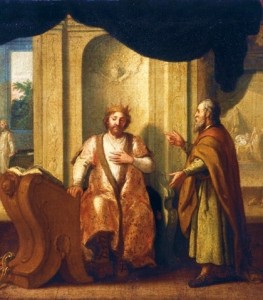 Of course, being a Christian novelist, I believe God is the ultimate storyteller.  Humans respond to a story much better than they do to a sermon.  The prophet Nathan  could have told King David that he had committed a great sin in taking another man's wife and then sending that man to the front of the battle to be killed to cover that sin.  Instead, Nathan told the story of the rich man with many sheep who stole a poor man's pet lamb, the only one he had, the one he had raised with his children and which was like a daughter to him.  He told how the rich man slaughtered the lamb and served it to his guest.

When David heard this, he "burned with anger against the man and said to Nathan, 'As surely as the Lord lives, the man who did this must die! He must pay for that lamb four times over, because he did such a thing and had no pity.'” (2 Samuel 12:5-6)  Clearly, the story had touched David's heart.  It made its way past his defenses and excuses and made him see truth.  Then when Nathan told him "You are the man," David could see the depth of his sin before God.  He could confess that he had done wrong. 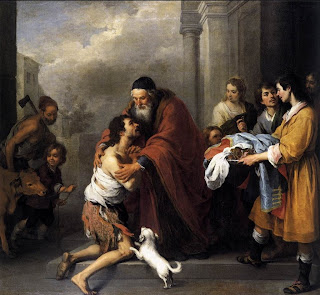 Jesus Himself was a great storyteller.  He could have told the people how deeply God loves them and longs for them to turn from their sin and return to Him.  And I'm certain He did tell them that on many occasions.  But what do we remember?  The story of the man who gave his son all of his inheritance only to see the son waste it all on debauchery.  But the father in Jesus' story was not full of wrath and vengeance.  He waited eagerly for his son to realize he was living worse than the pigs did.  He watched with yearning for his son to come home and, when he did, ran to meet him, kissing him and celebrating over him, returning him with no reproach to his place of privilege and favor as a son of the house.  (Luke 15:11-24)  What more beautiful picture could we have of God's love and longing for us?  And we remember it because Jesus showed us truth through a story.

Jesus opens this parable by saying "There was a man," so I expect that, if He said there was one, there was.  However, the existence of this particular man has absolutely no impact on the story itself.  Because the story, like all good stories, is a picture of truth.

I'm not one to write issue-driven books.  Others have that calling and write them well, but not me.  I would rather write a good story that happens to have some truth in it.  I love to get comments from readers about things in my books that have made them see things differently.  "It made me think about how I should treat my husband."  "It showed me the kind of love Christ has for me."  "I realized that I didn't have to do anything but come to Him just the way I was."

If I can show my readers something of truth, I feel I have done what I was created to do.  I imagine my fellow writers agree.

Have you read fiction that challenged your way of thinking?  Why do you suppose story is so powerful?

DeAnna Julie Dodson has always been an avid reader and a lover of storytelling, whether on the page, the screen or the stage. This, along with her keen interest in history and her Christian faith, shows in her tales of love, forgiveness and triumph over adversity. She is the author of In Honor Bound, By Love Redeemed and To Grace Surrendered, a trilogy of medieval romances, as well as Letters in the Attic, The Key in the Attic, The Diary in the Attic and, coming up, The Legacy in the Attic, contemporary mysteries. Her new series of Drew Farthering Mysteries will debut in the Summer of 2013 with Rules of Murder from Bethany House.  A fifth-generation Texan, she makes her home north of Dallas with three spoiled cats.
Posted by DeAnna Julie Dodson at July 10, 2013