Had a Popsicle yet this summer?

It's hot here in western Colorado, and that whole "it's a dry heat" thing doesn't really make it any easier to endure. Hot is, well, hot, and we don't have AC or a swamp cooler. So, in search of a brief respite, Popsicles (aka ice pops and freezer pops in the USA) ice lollies (England), freeze pops (Ireland), icy poles (New Zealand) or ice blocks (parts of Australia) are the summertime treat of choice for everyone from the smallest grandbaby to the oldest in the household. (Oh, dear, that would be me.) 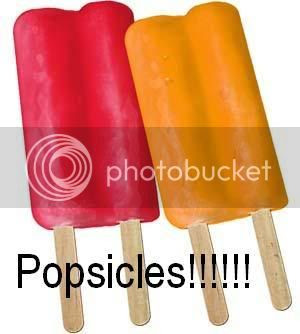 Popsicles, to my surprise, are much older than I thought.

The story goes that on a chilly San Francisco evening back in 1905, an 11-year-old boy named Frank Epperson was making himself a soft drink, using a cup and a stirring stick to blend a powdered mix with water. Somehow he got distracted and left the concoction on his front porch overnight. In the morning, he discovered the drink had frozen with the stick inside, making a handle of sorts. Eureka!
Amazingly, by the time it occurred to Frank as an adult that such frozen treats might be marketable, no one else had thought of (or stolen) his idea yet. He patented “frozen ice on a stick” in 1923 and started making what he called “Eppsicles” and his children soon termed “Popsicles.” A year or two later, Epperson sold his patent to the Joe Lowe Co. The nickel-priced novelties soon took off like wildfire. (Well, really cold wildfire.) These days, the brand name is owned by Unilever, but most of us refer to all ice-on-a-stick as “popsicles,” the way we call all tissues “kleenex.”Read more: http://blogs.smithsonianmag.com/food/2010/07/a-brief-history-of-popsicles/#ixzz2ZpNRiF9A Follow us: @SmithsonianMag on Twitter

I had no idea Popsicles were almost a century old, did you?

Do you remember your first Popsicle? I don't, but I do remember watching this PSA every Saturday morning and wondering what on earth pomegranate juice was.


Seriously, who knew anything about pomegranate juice in the '70s and '80s?

I never made my own Popsicles, because for some strange reason, we never had plastic wrap OR toothpicks at our house. Today, we have both... but I still don't make my own Popsicles. "Otter Pops" (something else I never had as a child) are the frozen treat of choice. Why? They are cheap, plentiful, and tasty. (And low-calorie, but we don't mention that in our male-dominated household.)

FYI, "bomb pops" came to be in 1955 (perhaps the fruit of the Cold War, no pun intended.) and are still a favorite for many.

There's an interesting Bible verse in Proverbs 25:13 (The Message):


Reliable friends who do what they say are like cool drinks in sweltering heat—refreshing!

I call those Popsicle friends, and they are few and far between. It's my heart's desire to BE one of those folks when my own friends are in hot water, when the pressures of life are heating up around them, to be the one who brings refreshing, who brings life. How about you? How can we refresh one another when life is hot and dry and miserable?


For the rest of you: Did you ever make your own ice pops? What's the best recipe?


For you history buffs: What treats did folks cool off with before the Popsicle?